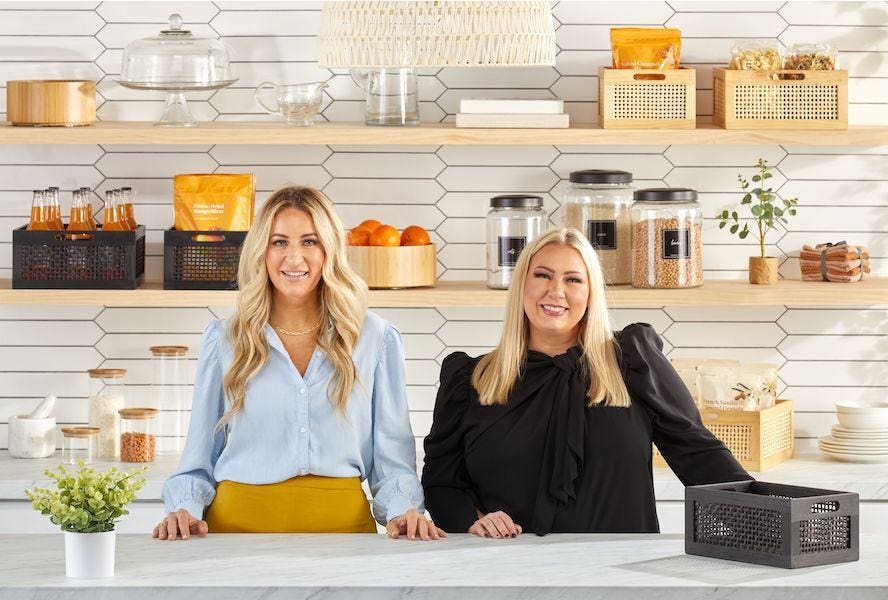 Home organization feels like just another trend we see on Pinterest, Instagram, and YouTube but anyone who likes to live with a bit of sanity in their life knows that having an organized home has nothing to do with getting likes on social media. It’s a true lifestyle choice. No one knows this more than sisters and professional organizers, Brandie Larsen and Ryan Eisland, founders of Home Sort. But, these incredible women are more than just organizers, they’re entrepreneurs, television stars, and moms. They have a home organizing product line with mDesign, a television show on The Design Network, and a growing business. Their practical yet pretty approach to organizing is changing lives, one shelf at a time with a great sense of fun and humor.

There are a lot of interesting ways that people start businesses. It often comes from trying to solve a problem or an “a-ha” moment. But for Larsen and Eisland, the idea came from their love for all things home. “We were sitting by the pool at the gym and hanging out while our kids were running around. We were doing the pickup and drop-off thing. Our mom owns a research company and we’ve always worked for her. But we knew some changes were coming to that. So Ryan asked our cousin if she wanted to start an organizing company. I said, ‘I’m sitting right here.’ We didn’t know anyone who was doing it at the time,” says Larsen. “We love home, we love organizing and we love decor— changing things up.”

The women gave themselves a month to launch and started shooting content in their own homes. It was 2017 and while the social media landscape was different at the time, they had a hunch they were doing the right thing despite their hesitations. “We [said] we’re going to really make these spaces in our homes organized and camera ready. And if all else fails, the entire business tanks, and no one ever hires us, really all we’ve done is re-beautify our homes and really dial in the systems,” says Larsen.

Still, the sisters approached everything with an entrepreneurial mindset. “We view everything as a hurdle, not a wall. And we just keep hopping over hurdles trying to take it to the next level.”

With their business thriving, Home Sort was thrust into the spotlight in March 2022 when they launched a home organizing product line with mDesign. The brand is a $275 million private e-commerce company that designs and manufactures more than 11k products all in the storage, decor, and furniture categories.

The women were fans of the brand and often used their products in the homes they were organizing. They began a relationship through social media. “We wanted organizing that was display-worthy, at a good price point, but looks expensive. And have some design to it,” the sisters explain.

The line, which is sold both on mDesign’s website and Amazon, has everything needed to organize just about any space in the home. While there are lots of standard essentials such as clear bins, Lazy Susans, and pot racks, it goes far beyond the basics with beautifully designed bamboo pieces including drawer and pantry bins, spice racks, drawer dividers, and even bread boxes. There’s also a sleek black step stool to help organize higher spaces. These aren’t just the kind of products meant for stashing away. For example, the glass canisters with wood lids can decorate a kitchen counter or occupy open shelves as pieces of functional decor.

Although they are not technically product designers, Eisland and Larsen threw themselves into the process, truly collaborating with the mDesign team. They went above and beyond, not just attaching their name to a product like many creators and celebrities do. “We were with their designers who were drawing things up. It was really kind of magical and intimidating, all at the same time. But that’s kind of how it works. [We’d say] a product needs to be expandable. So they would take a mold or something that maybe they already have. And then we customize it,” Eisland explains.

They wanted the products to be an authentic reflection of who they were as people, and their brand, which meant design with maximum functionality in mind— creating something that simply cannot be found elsewhere. Eisland tells me, “Even from just an aesthetic point, there’s not a product that looks like this. And I think people really love it.”

On April 5th, 2022, Home Sort debuted a show called Sort It Out on The Design Network. The six-episode series is available on Roku, AppleTV, and YouTube as well as through the network’s website and app. Each episode features a different home and family trying to organize everything from a home office, to a closet, a kitchen, and even a laundry room that also functions as a multi-purpose space and cat bedroom.

Filming the show was an incredible experience for the sisters. “We had six families and took a space that was keeping them from living their best life. Our team came in and just transformed the space. So they could focus on what matters. So I hope [audiences feel] the heart behind it,” says Larsen, “It was real and authentic. Every amazing product we use was there.”

Each episode is a very digestible thirteen minutes long and has lots of great ideas to help viewers organize their homes, no matter what their clutter looks like. “We want everybody who watches to be able to take away some tips and tricks to apply to their own home. That was really important to us because a lot of people need to get organized. We want to be a part of their journey. And if all they can do is watch the show and get some tips, that’s great. There are all kinds of spaces, all kinds of sizes. We show that no matter what the space [is like], organizing improves it,” says Eisland.

What’s Next For Home Sort

While a second season of Sort It Out hasn’t been announced just yet, it’s likely on its way. There are also more products from mDesign launching soon with organizers for the closet and bathroom. So every corner of the home can have its own Home Sort touch.