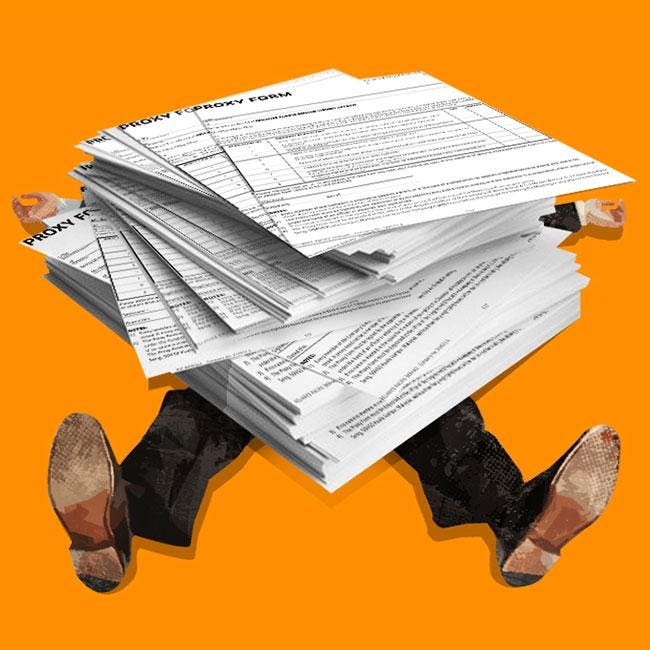 A shorter version of this article appeared in the April 25, 2017 issue of Forbes.

It’s spring: Corporate proxies are in the mail. Are these a noble exercise in shareholder democracy? Or an expensive farce?

If you own corporate shares directly, your mailbox will soon fill up with ballots for directors and auditors. Should you fill them out or file them in the trash bin? Until recent years you could have made a more compelling case for the latter. But now there are signs that the protesters in the boardroom just might accomplish something.

Dissidents have been waging vote battles against corporate managers for decades, taking advantage of Securities & Exchange Commission rules that give liberal access to the proxy machinery. Their proposals concern governance (such as whether directorship terms are staggered, or whether outsiders can put up nominees for election) as well as social and environmental causes. So far their successes at the ballot box have been meager.

Proxy voting comes with a cost, in paper and in legal bills, and it looks quixotic to the folks who run corporations. “The current shareholder proposal process has been hijacked by corporate gadflies and political activist investors,” complained John Engler, president of Business Roundtable, at a congressional hearing last September.

At the same hearing James Copland, a lawyer at the Manhattan Institute, a conservative think tank, described what came of his tracking the votes at 250 large corporations. Over a one-decade period, he said, there were 1,444 social-policy propositions at these companies. Only one, relating to lobbying disclosures at Fluor Corp., passed. Copland endorsed a suggestion from Yale professor Roberta Romano that dissidents should have to pick up some of the cost when their shareholder proposals are defeated.

One reason that cause-related propositions haven’t gotten much traction is that institutional investors have been reluctant to tangle with management. Until now. BlackRock, curator of the iShares exchange-traded funds, announced in early March that it will vote against the reelection of directors who drag their feet on dealing with climate change. The same week State Street, which runs the SPDR ETFs, took up a feminist cause. It said it would challenge companies that fail to get women on the board.

What about Vanguard, which oversees $4.2 trillion of assets? It’s not doing enough to challenge insiders, says Eleanor Bloxham, who runs Value Alliance, a consultant to boards of directors. Often, she says, Vanguard will declare its intention to “work behind the scenes” in support of worthy causes while abstaining from the vote. “That’s a weak excuse for not voting,” she says.

Vanguard says it votes with management 92% of the time, without disclosing how much of the 8% represents absentions. It says that, in the 12 months to June 30, 2016, it voted for 4% of 315 social and environmental proposals offered up by shareholders. It declines to say how many of these “yes” votes did no more than follow an endorsement by the board.

If you feel the urge, discard your funds in favor of corporate shares held directly. Next, scan proxy solicitations for debates about issues that you care about. You can get a guide to upcoming shareholder votes from As You Sow, a nonprofit that follows predictable do-gooder causes like tamping down executive pay and shunning fossil fuels.

That’s a lot of work, which is why most individual investors toss proxy statements in the trash. Can Wall Street do better?

Here’s a radical idea: have fund companies flow through voting power to their customers. On your account profile screen you’d have the option of directing proxies for all the shares you indirectly own to some player with the time and motivation to rattle directors’ cages. You might select the Sierra Club or the Interfaith Center on Corporate Responsibility or, who knows, Carl Icahn.

Complicated? Not really. Just such a flow-through gets a dividend payment from IBM to the Vanguard Total Market Index Fund to your brokerage account.

I asked Vanguard for a comment. I was informed that my version of shareholder democracy might conflict with Vanguard’s fiduciary obligations.

I don’t think it does. Consider what happens when a fiduciary runs a collection of separately managed accounts. If you have one of those accounts at Walden Asset Management, you can leave voting to Walden, which means that Timothy Smith, director of shareholder engagement on environmental, social and governance issues, will have a lot of say. Or you can direct the votes on your shares. Walden is not violating its fiduciary responsibilities by letting you vote for a fracking ban somewhere and letting another client vote against.

Hey, Merrill, Fidelity and the rest of you who want to win back customers stolen by Vanguard: Set up a proxy check-box. Cut a deal with BlackRock and State Street that passes along the votes held by their ETFs.