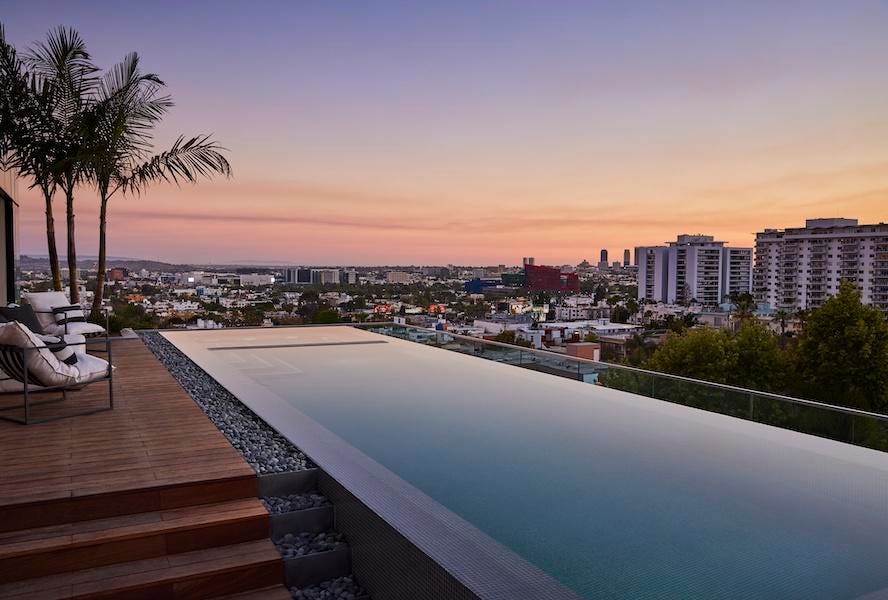 A decade ago, the Sunset Strip in the West Hollywood neighborhood of Los Angeles was known for its nightlife scene and being a hotspot for the paparazzi. But in recent years, it has undergone a transformation, becoming a true luxury enclave. Then, in June 2021, the opening of Pendry Residences West Hollywood by Montage Hotels & Resorts took the neighborhood to a new level entirely.

Designed by Ehrlich Yanai Rhee Chaney Architects, the building features everything a high-end buyer could ever want and more. “Born of a collaborative vision by true Angelenos, mixing hotel and residences, a private social club, culinary inspiration by Wolfgang Puck, this will be the vibrant gathering place that West Hollywood deserves. With polished comfort, impeccable service at the ready, and a fresh expression of luxury, Pendry West Hollywood and Pendry Residences West Hollywood by Montage Hotels & Resorts elevates the Sunset Strip to a new level of sophistication,” Tina Necrason, executive vice president of the residential division of Montage International tells me.

With units ranging from $3 million to $30 million, this $500 million dollar project, was close to fifteen years in the making. After all, perfection takes time. Encompassing a full city block along Sunset Strip, this storied location has a rich history. The lot was originally the home of actor John Barrymore and then the location of the famed House of Blues nightclub.

Truly a new level of fully-serviced resort-style living in Los Angeles, all homeowners have a private entrance, stunning views, and top-notch amenities.

This exclusive building has just 40 homes including two to three-bedroom floor plans from 2,000 square feet to more than 4500 square feet.

Mathew Chaney of Eyrc Architects tells me, “The architecture of Pendry Residences West Hollywood is unabashedly contemporary. The design concept originated with our intention to create superlative views and indoor-outdoor experiences while prioritizing privacy. Unencumbered by a nostalgic style, we are able to maximize the essential elements of lush California living.”

Some residences even have expansive private outdoor spaces with terraces up to 3400 square feet. These homes were designed to take full advantage of the city’s amazing weather with seamless transitions from indoor to private outdoor space. The Terrace Estates feature private pools, hot tubs, and even outdoor kitchens.

Steven Ehrlich of Eyrc Architects explains, “The contemporary architecture captures the energy of Sunset Boulevard and offers superlative views of Los Angeles.” From the Hollywood Hills to Beverly Hills and all the way to Downtown Los Angeles, these homes have some of the best views money can buy.

The spacious bathrooms are finished with honed Arabescato Cervaiole marble. look like something you would expect from a five-star hotel. Even the smallest details were carefully thought out. One example of this is that the master baths have custom double vanities with seamless integrated sinks. Bespoke millwork and polished nickel fixtures by Waterworks are the ultimate finishing touches.

Essential for every Angelino, the closets are another noteworthy feature. With beautiful wood shelving, there’s plenty of space to hang everything from suits to casual wear and red carpet dresses. In addition to shoe racks and shelves for accessories such as handbags, there’s also a center island and custom lighting both under the cabinets as well as in the ceiling.

In addition, homeowners receive a one-year membership to The Britely and may utilize all hotel amenities, including a 24-hour gym, spa, and several restaurants.