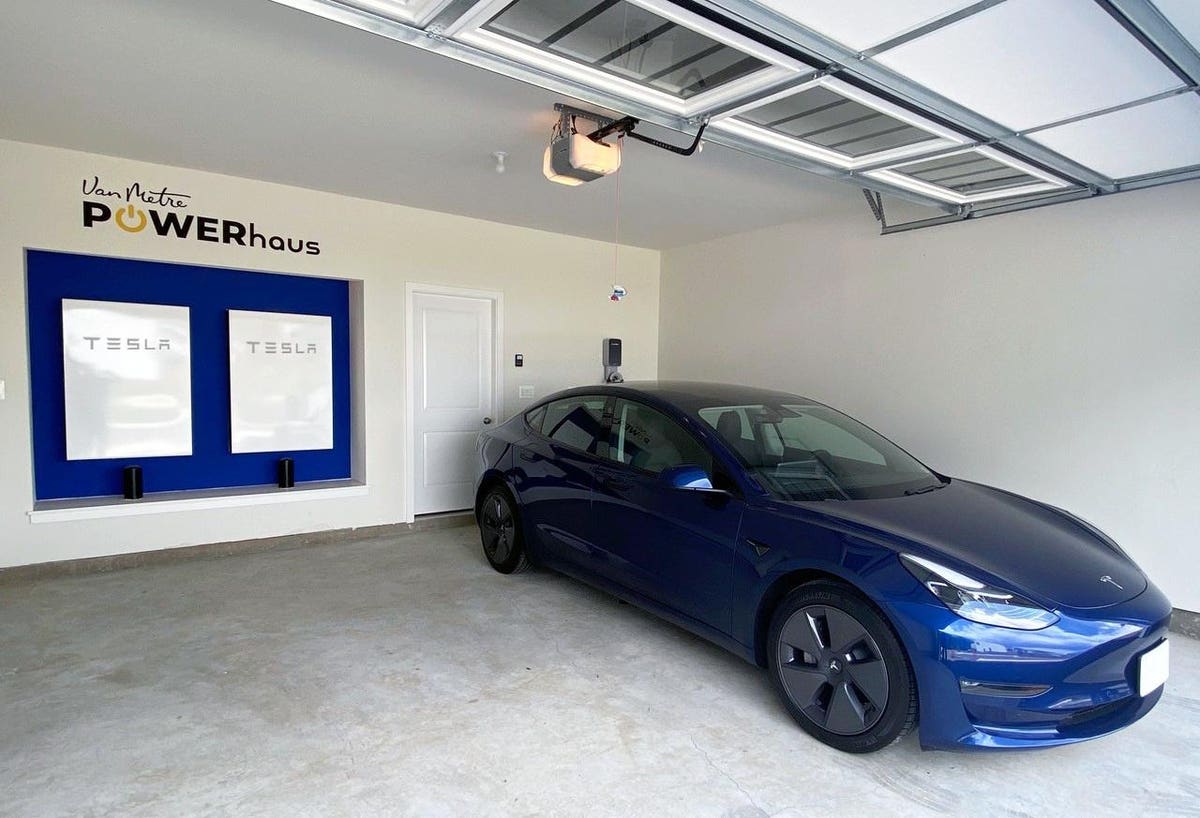 Last week, I hitched a ride through the far suburbs of Washington, DC in a Tesla Model 3, entered a newly built subdivision where we found a row of townhomes and pulled into the garage of the first one. The car was plugged into the electric vehicle charger that was drawing from the nine-kilowatt solar array on the roof, feeding extra energy into two Tesla PowerWall batteries installed and displayed on the front wall of the garage.

Taking a quick step outside, the architect on the project, Joseph Wheeler, who also is a professor of architecture at Virginia Tech School of Architecture and Design, explained the true magic behind the 2,700-square-foot townhome: It was a modular project made of 13 individual cartridges and 8 panelized walls.

By Wheeler’s calculations, the modular construction is the only way to get the integrated technology experience that was able to deliver this net positive home.

I was able to step inside and tour the project along with the builder behind it – Virginia-based Van Metre Homes. Every step of the way was a story about how the technology was part of the module and how it was able to marry together during the setting process, that was nearly seamless.

As a very forward-thinking organization, pushing the envelope on innovation to deliver more comfortable, efficient and healthier homes, Van Metre was eager to share the lessons learned on this unique, disruptive prototype home.

Lesson 1: Modular is Necessary to Keep Up with Technology

This is where housing is headed because consumers demand and expect the latest and greatest technology. Creating that experience with onsite construction is more and more difficult because the fragmentation of trades during the process. When the construction happens in the factory, it can be a more focused part of the design and executed properly with all teams included from the inception.

The all-electric POWERhaus exhibited technology in every corner to make it a powerful tool for the resident’s comfort, convenience, and health and efficiency. Starting with the front door, which was a new delivery from Masonite that had a built-in camera and Yale Home smart deadlock that directed information to the whole home operating system.

That system, by Alarm.com and powered by Bright Suite, could be viewed anytime by the resident using their smart device or a control pad mounted near the kitchen. Through the control pad, the resident could see water usage, energy use, and even who is at the front door.

The system also gives insights on how much is left in the Tesla PowerWall batteries, or how much power is coming in through the solar panels. Again, this is technology that is so well integrated it’s like having an iPhone for a home – a task the team believes is only capable in a manufacturing setting.

The technology also makes it possible to create an energy positive living environment. Part of that was figuring out how to handle heating water, which the team invested a lot of research into, ultimately bypassing a tankless system based on industry feedback and deciding on an electric hybrid heat pump system with an 80-gallon tank.

Paul Jester, vice president of market intelligence at Van Metre Homes, says that while this prototype didn’t deliver cost savings, it’s taking the company in the direction that it needs to go. For one, it is ultimately a better home, because it is more efficient and higher quality. It also has technology that residents will expect in the near term because it adds so much value. Such as the Alarm.com system that will detect a leak and shut it off, potentially saving hundreds if not thousands of dollars.

Tim Sullivan, senior managing principal at Zonda, a nationwide data and media group, shares that this home is in the sweet spot for today’s demand. The majority of consumers are after a three-bedroom, single family home between 2,000- and 2,500-square-feet.

Consumers also are smarter about healthy living environments, so the team responded by integrating that technology into the design. Van Metre selected a Mitsubishi electric HVAC system with ceiling-mounted air handlers that went together in a ductless system, minimizing what was needed to connect the cartridges.

After the design was outfitted with all the technology that consumers could dream of, the cartridges were packed up to arrive onsite. This part of the process was nerve wracking for the team as they watched whole walls with windows and doors already installed loaded onto a truck.

The transportation and delivery went without issue, although Kevin Rabil, the executive vice president at Van Metre Homes admits that transportation is going to play a key role in the future of this process for the home builder.

“We will definitely plan to be within a 50-mile radius of BASE, our production plant located in Winchester, Virginia, to maximize efficiencies” Rabil said.

Once the cartridges were at the site and the team was ready to set them was a true test. Wheeler learned that there is a science to preparing the onsite ground crew so that the crane operator never has to wait, which will not only save money on the expensive crane rental, but it will create more efficiencies throughout. With this first set, he saw opportunities to shave off time with a better rigging process that would make an easier set.

Even with the learning curve, the three-story POWERhaus was set in one day on a slab on grade foundation – the siding was already on, roof shingles in place, and windows and doors hung. The set is captured on this video. And, after two more weeks of final touch ups, it was considered complete. During that two weeks, the finished floor was installed to tie it all together. Plus, other details were completed, such as soffits on the ceilings that created a barrier for the connections to be made after the cartridges were set, but that also are a subtle, attractive design feature.

The deck was prefabricated as well and plugged into the second floor of the townhome seamlessly, where structural beams were added by the onsite team.

While the team was very pleased with the results, they want to continue to explore how to improve on the design, including teasing out what finishes should be completed in the warehouse and what should be done on site. Wheeler advises that the systems in each cartridge should be self-contained so that there are fewer connections, which means more efficiency and less risk.

Another aspect that was a huge learning curve was the firewall design. As a modular build, it wasn’t possible to install a shaft liner, so they had to create a new solution. He spent months researching to come up with something unique to the project being a townhome and sharing a three-story wall with another home that could be in place when the cartridges were set.

With a continuously growing portfolio of companies, Van Metre was already vertically integrated and the growth mindset positioned it well for innovation. Mike Sandkuhler, who serves as the vice president of building operations at the company, said that manufacturing the modules in the company’s truss manufacturing warehouse space was an obvious next step.

“We have had the space for 15 years and have already been panelizing and building a substantial number of components there,” he said.

This is a huge win for builders who have to outlay a lot of capital to purchase land and are hesitant to get into warehouse space because of the additional CAPEX said Tim Sullivan, senior managing principal at Zonda, a nationwide data and media group. That additional expense is what is keeping a lot of builders out of prefab.

But, it’s not all about having the space. Builders also have to pull contractors and the rest of the team forward with the new process, which Van Metre had a lot of success with.

“We had many trade partners work on this project and they enjoyed it,” Sandkuhler said. “They were enthusiastic about working in the same place every day; it’s much more comfortable and accommodating.”

Right now, with the shortages of trade labor, a builder can only build so fast. Van Metre is very interested in how productivity will increase by being in a factory, ultimately envisioning a set up that could have multiple shifts per day.

The data from Sullivan’s research shows that most builders are facing the same challenge. According to his numbers, 66% of builders are experiencing labor shortages, which has been growing month over month.

The factory environment has many other benefits as well, such as quality control. In addition, all the trades can be in house, which will save on all overheads on profits that usually get tacked on during the process of going from manufacturer to service provider. There also isn’t the additional factor of getting charged for the transportation to the job sites, the lost hours of traveling across town multiple times in a day.

Van Metre also experienced a very smooth modular permitting and inspection process, which was managed through a licensed third party hired by the state of Virginia.

“For onsite construction, we usually work with local jurisdiction that work very slowly,” Sandkuhler said. “We found that working with the third party for modular was much faster; they were very responsive. When we had permit revisions, we got responses and comments the same day. With local jurisdiction, that would never happen.”

The third-party inspectors would come to the warehouse and perform a very thorough review process, including testing all the electrical connections, along with all the plumbing in a cartridge. The only liability were the connections.

“We’re still in research phase and not quite ready to scale,” said Rabil. “We plan to keep analyzing how to perfect the model. We will need more factory space, which is definitely a huge obstacle.”

The next step for Van Metre is to build four townhomes together, which will provide a better scale to figure out the cost components. Through that process, the builder will integrate subs and materials to analyze every inch of the house and how to put it together in the warehouse and onsite in a more efficient manner.

That focus on new design and innovation marries well with why consumers are choosing to move. According to Zonda data, the biggest driver is new design.

For the time being, the POWERhaus also will be feeding them data. There were many analogies to the car industry. Sandkuhler says, “the house was built in a factory, but, like a car, you don’t know what you can do with that vehicle until it’s on the race track. And now we have this home on the race track.”

“We want to get better at our craft, that’s the investment the company is making now,” Rabil said.

“Soon we’ll be able to understand all the numbers and labor hours, which is arguably a more critical part than even building it. We are taking this factory mindset and whole integrated mindset and taking it directly to the field now to continue to iterate, and each product we are building is getting better and better.”