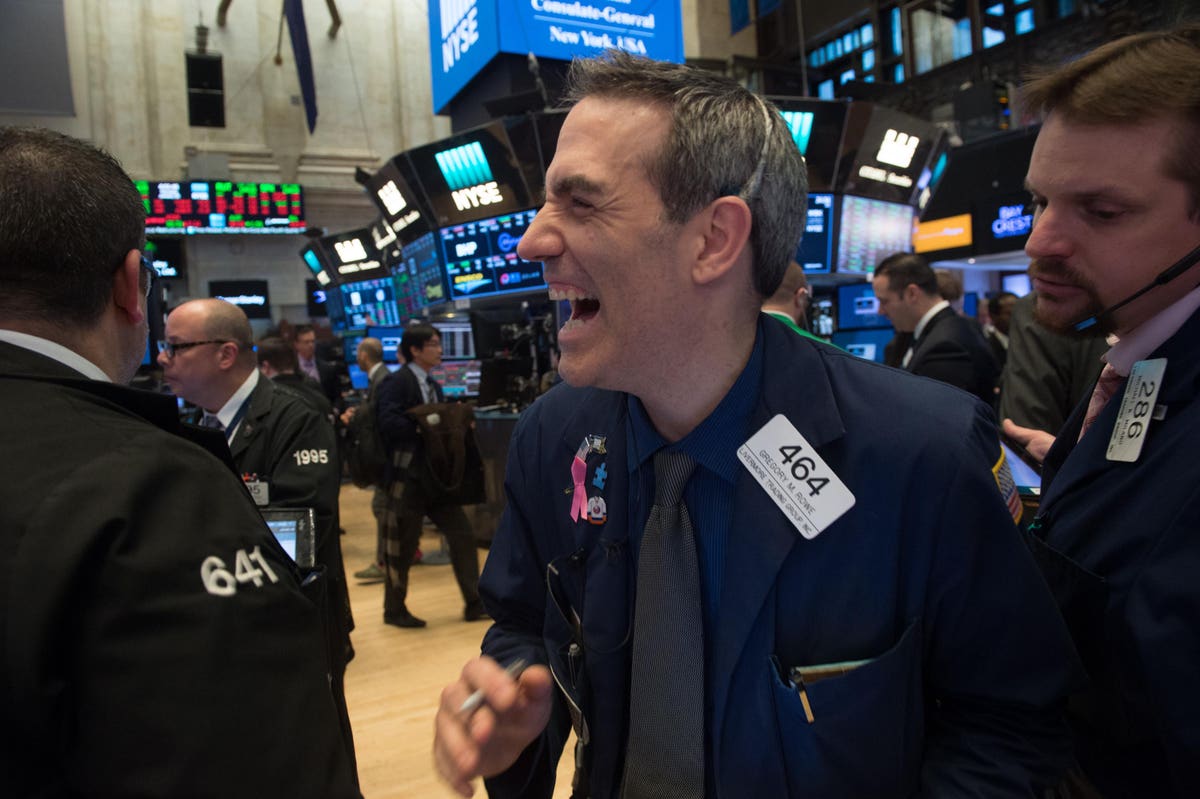 The U.S. stock market was up 8% in three weeks, which is a little under half of what the S&P 500 did all last year. January marked the 22nd of the last 23 months that the market was higher in total return. It’s almost impossible today to make a bear case for anything except for, maybe, cryptocurrency and Treasury bonds.

“I’d expect the market to be reminded that there is risk out there,” says Jordi Visser, CIO of Weiss Multi-Strategy Advisers. “We’ve become complacent. I think it’s about time for people to remember that markets go down, at least for a short period of time.”

Visser actually said that yesterday in an interview during mid-day trading. It seems prescient given the 370+ points drop in the Dow and S&P. The last big drop was registered as recently as Jan. 16, down 287 points from start to finish.

Yesterday, the S&P 500 index had its worst day of the year — falling a whopping 0.7% at the closing bell.

Prior to this, the MSCI World Index and the S&P 500 index had entered their longest bull period without a correction of more than 5%.

Strategists from Goldman Sachs recently highlighted the risk of an equity market correction of 10%, something that may make for interesting headlines and talking points, but unlikely to derail the economy. Markets are neutral at worst.

According to Goldman, the average bull market correction in equities is 13% over a four month period. The Dow is up 87% over the last five years, while the MSCI Emerging Markets Index is up only 14%.

Bonds are feeling the brunt of the sell-off.

“Rising bond yield is a ticking time bomb,” says Naeem Aslam, chief market strategist over at ThinkMarkets in London and a Forbes contributor. “Expectations around higher inflation, stimulated by Trump’s tax incentive, need to be factored in. The markets have decided to wake up to this idea now because firms will be increasing wages and bonuses. The bond sell-off is what spooked investors.”

Tomorrow’s Fed monetary policy meeting is one reason for today’s sell-off. The FOMC meeting is Janet Yellen’s last as Fed chairwoman and the markets are expecting the meeting to conclude with a “hawkish hold,” says Neil MacKinnon, a senior economist with VTB Capital in London.

If the equity sell-off continues and much of the Fed talk leans hawkish, investors should expect a pushback by Trump. Interestingly, the name of San Francisco President Jon Williams was added to the mix of candidates to become the next Fed Vice Chair. Williams, who in October expressed a belief that the current neutral rate on Fed funds and interest rate on excess reserves is about 2.5%, may provide a ceiling to hawkishness for much of 2018, the Bretton Woods Research firm wrote in a note to clients today.

“The Fed may try to get more aggressive with rates as growth and inflation surprise to the upside, but we are not too worried at the moment,” says Bretton Woods founder Vladimir Signorelli. “Overall, we remain constructive on equities,” he says.

The global economy is doing well.

China is growing strong. Brazil is coming out of the douldrums. Asia as a whole is growing.

But the core economies are driving much of the sentiment, particularly in the U.S.  Investors and corporate executives continue to cite regulation rollback and corporate tax cuts from the positive outlook.

In Europe, initial estimates for GDP growth in the eurozone show another strong quarter. The eurozone saw annual GDP growth go from 1.8% in 2016 to 2.5% in 2017, led by Germany. It was the fastest annual growth rate in Western Europe since 2007.

Some investors are wondering if the European Central Bank (ECB) might withdraw from its quantitative easing program as early as September thanks to growth returning to France and Spain in particular.

“No one is negative,” says Visser. “I think the biggest fear for me right now is that it won’t take much for us to see a bigger correction. As a firm, we are looking for changing our positions. What has worked in the last two years, might not work in the same way,” he says. “Right now, I’m liking oil; I like the energy master limited partnerships and I like Mexico despite the fears of what’s going on in NAFTA,” he says. “And I still like Japan.” That was Visser’s favorite pick last year. The MSCI Japan rose around 24% in 2017.