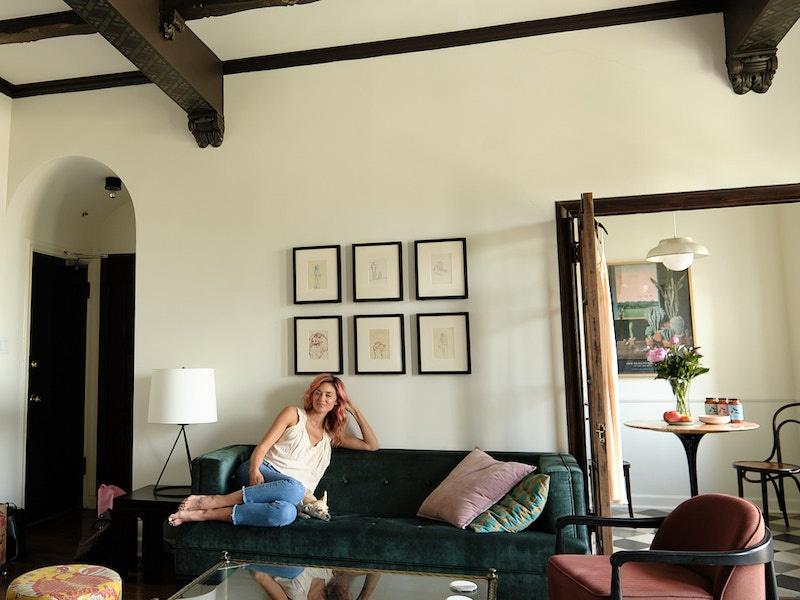 If the name Caroline D’Amore sounds familiar, it’s because you may have heard of her family’s pizza restaurant D’Amores, which has been a Los Angeles staple for years. She’s also acted in films, modeled, and even toured around the world with Paris Hilton as a DJ. But 2021 might just be her year.

In addition to being the newest cast member of The Hills: New Beginnings, she also relaunched her line of pasta sauces, Pizza Girl, which is currently available online as well as at Gelson’s market throughout the Southern California region.

But none of this a surprise considering the D’Amore name. “My family owns D’Amore’s Pizza. It’s a delicious little hole-in-the-wall, East Coast style pizza restaurant. I grew up catering and going to all the movie sets with my dad and helping [because] my mom passed away when I was five,” she tells me. “So I had no choice a lot of nights to just go with dad and learn how to cater and help out with the business. So that’s kind of where my entrepreneurial food industry business side started.”

While D’Amore launched the line in 2019 to much success and fanfare, the challenges of manufacturing and sourcing ingredients during the pandemic forced her to temporarily shut down her business. But that hasn’t been the entrepreneur’s only hurdle.

To further add to the business set back, her personal life also changed tremendously, when she ended up getting divorced and moving out of her Beverly Hills home. With a life shift, D’Amore suddenly found herself living in one of the most iconic buildings in Los Angeles, Villa Carlotta. Located in the Los Feliz neighborhood, this storied residence was designed by Authur E. Harvey and built in 1926 by Thomas Ince, for his wife, actress Elinor Ince.

Dripping in old Hollywood glamour and art deco style, it was designated as a Los Angeles Historical Cultural Monument in 1986. Villa Carlotta is an interesting spot as a home base. Although they offer short and long-term furnished rentals, it doesn’t have the transient quality that one would expect. It surprisingly feels equal parts hotel and community.

However, Villa Carlotta was probably the last place where D’Amore could have imagined living. “I was born in the valley and moved to Malibu. I went to Malibu High and then I went I bopped around for a very long time, DJing. So, I was traveling all the time. I had apartments in Hollywood. I had an apartment in New York. And then I was married and I settled down in Beverly Hills. I went through a divorce and then Covid hit and I needed a place to live immediately.”

When a friend told to her check out Villa Carlotta, she immediately fell in love with it. “It’s a little hidden gem and so special. It has so much history and it’s just gorgeous.”

The apartments were designed by Studio Preveza, under the direction of founder Christos Prevezanos. The combination of old Hollywood architecture such as beamed ceilings and large windows along with contemporary furniture pieces give the apartments a true charm that simply doesn’t exist with most furnished rentals. Extraordinarily curated, D’Amore’s apartment feels like a true home. The pink chairs even somehow feels like an extension of her pink hair.

While D’Amore could spend all day working her apartment, she prefers to take advantage of the building’s amenities including a rooftop deck with stunning views and a pool area that looks like it belongs in a European hotel. But she spends most of her time at the pool house, which is a separate structure that features a bar and coworking spaces. She enjoys working and doing Zoom calls in the space.

“[I like] being able to lay out by the pool, which is the most beautiful pool. You can watch the sunset on the rooftop,” she says.

A New Beginning For Pizza Girl

Villa Carlotta has been more than just a new home for D’Amore. It’s been a good luck charm of sorts. It’s where she’s was able to make a life for herself post-divorce and coincidentally met the investors for the relaunch of the Pizza Girl brand. “Our mutual friend lives in the building. And they come here [the pool house where we’re sitting] all the time. They stayed in touch throughout COVID. They were actually on lockdown in Australia for two weeks, called me and they were going crazy. By the end of the conversation, they signed on.”

In the beginning, D’Amore funded the whole project on her own. “At first, it was very mom and pop. I walked a jar into Erewhon a couple of years ago, and told them they had to try it. They said, ‘That’s not how this works. You actually have to go through the right channels.’ And I said, ‘This is how I’m doing it. I’m here. Who can I talk to?’

She ended up getting her product into over 100 supermarkets by herself. “It just went on and on and on and then COVID hits. Every single jar of sauce that I had sold out in two days with the big supermarket rush. And you would think that would be a good problem to have. However, all these big companies bought up all the organic farms. So little companies like mine were unable to source their ingredients. It was awful, I was crying, I was devastated. I lost all my shelf space.”

The Rest Is Still Unwritten

But the entrepreneur is also a reality star and her life is on the verge of changing in a major way. Living at Villa Carlotta has actually made filming easier because the space is so perfectly designed. “When I first started filming The Hills, honestly, it was a nightmare. That’s why I was so grateful to live here at the Villa Carlotta where everything is just so perfect. And as long as you hide all of your shit in the closet, you’re good.” D’Amore tells me. “But you have a few cocktails, you kind of settle in, and you kind of forget that [the cameras] are there. I defiantly made sure Pizza Girl jars were placed accordingly. Because we all have to get our businesses out there. And that’s really important. That’s the whole reason I did this show, as invasive as this.”

As an entrepreneur with an opportunity to showcase her brand on the reboot of one of the most talked-about reality shows of all time, all of this has surprisingly brought stability to D’Amore’s life. “I think that finding my calling is just such a good feeling. I know so many people out there struggle to figure out what they want, and what makes their heart sing. When I was little, I never thought it would be the CEO of a pasta sauce company. And it’s just kind of all falling into place like magic.”