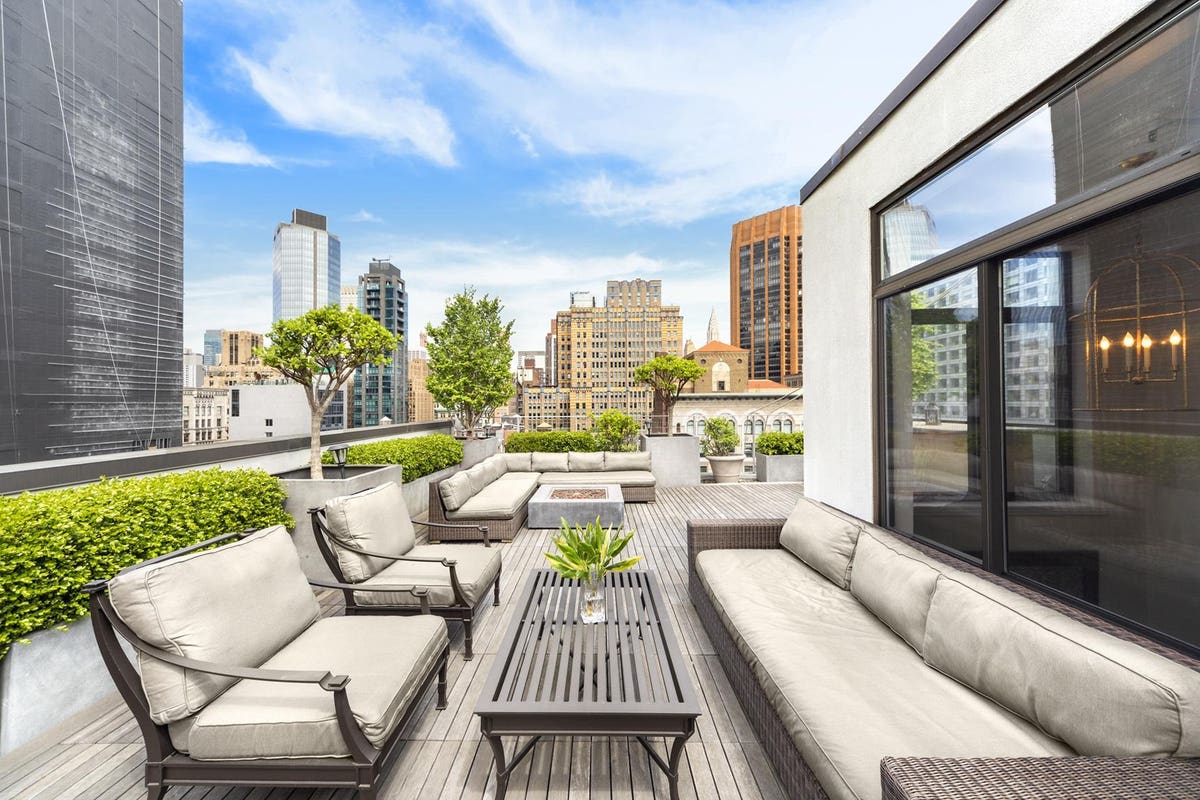 A quadruplex penthouse in Midtown Manhattan that comes with seven terraces and nearly 2,000 square feet of outdoor living space has hit the market for $9.995 million, according to a new listing with Forbes Global Properties.

The sprawling residence is owned by licensing executive Al Kahn and his wife, Jillian Crane. Khan, who has decades of credits in television distribution and promotion, is known for his work on such iconic children’s brands as Cabbage Patch Kids, Teenage Mutant Ninja Turtles and Yu-Gi-Oh. He’s also the architect behind bringing the wildly successful Pokémon animated franchise to the Northern American market in the 1990s while at the helm of 4Kids Entertainment.

Located in the emerging NoMad neighborhood, the sophisticated home has more than 4,400 square feet of interior, three bedrooms, three bathrooms and three half-baths, according to Arlene Reed and Rebecca Blacker of Warburg Realty.

Reached by a custom brass stairway or private elevator, the residence features an expansive living room with Brazillian cherry wood floors and a custom-built bar with black lacquer and green marble. A massive, white marble island anchors the chef’s kitchen, which is adjacent to the dining room. The kitchen also incorporates Glassos countertops, high-end appliances and a custom wine fridge.

“This is a beautifully renovated townhouse in a pre-war, full-service condo building with four floors,” Reed said. “It has an elevator, a home office and room for a gym. And at $2,265 per square foot, this home is priced to sell.”

Each of the four levels has some form of terrace space, with the third story incorporating two terraces and a balcony. The top floor—equipped with an alfresco bar and fire pit—is almost entirely devoted to outdoor space and takes in sweeping city views.

“With so much space, indoors and out, I never felt quarantined,” Khan said.

Apartments and condominiums with outdoor living space have become one of the hottest commodities in Manhattan’s housing sector, which is rapidly reawakening from the effects of the coronavirus pandemic. Properties that previously sat on the market for months are receiving offers in a market propelled by “incessant demand” and listing volume not seen in roughly five years.

From April 9-April 22, there were roughly 730 contracts signed in Manhattan, including about 400 deals struck between April 16-April 22, according to UrbanDigs. That was a 95% increase in contracts signed compared with the same period last year.

Warburg Realty is a founding member of Forbes Global Properties, a consumer marketplace and membership network of elite brokerages selling the world’s most luxurious homes.