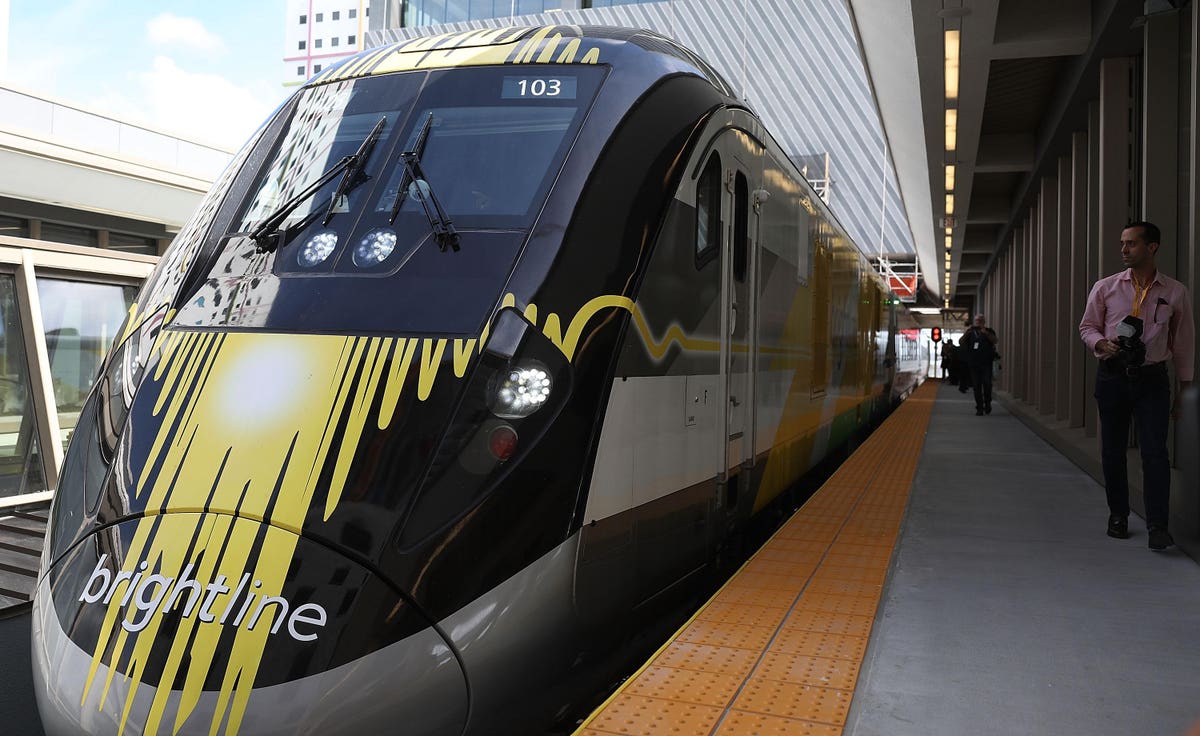 Brightline, the sole private passenger rail service in the U.S., has a green light from transit agencies to begin planning two extensions for its $5 billion high-speed train to Las Vegas that would tie it into existing Los Angeles-area commuter rail lines and, someday, California’s high-speed rail project.

The board of Metrolink, operator of commuter trains that run from downtown Los Angeles to communities sprawled across six Southern California counties, unanimously approved a memorandum of understanding on Aug. 21 to study linking Brightline’s XpressWest project to Metrolink stations in L.A. suburbs Rancho Cucamonga and Palmdale. Each of the extensions would be about 50 miles from Victorville, California, the current terminus for XpressWest. They would likely add about $2 billion of additional construction costs for the Florida-based company.

“This is a forward-looking partnership that will allow us to explore the possibility to enhance the rider experience and attract new riders,” said Metrolink CEO Stephanie Wiggins. “Working with Brightline we can further connect our integrated regional transportation system. This could expand travelers’ access to passenger rail, which is a safe, stress-free form of transportation where riders can enjoy the journey as much as the destination while reducing emissions contributing to a cleaner tomorrow.”

Created by Wall Street investor Wes Edens, Brightline began running trains between Miami and West Palm Beach, Florida, about two years ago. (Regular service has been suspended during the Covid-19 pandemic.) The company is ramping up a major expansion in Florida, where it’s building a high-speed line linking West Palm Beach to Orlando. Construction of its 170-mile Las Vegas-to-Southern California line begins late this year, with a goal of operating trains at speeds of up to 200 miles an hour. The project was awarded $200 million of private activity bonds from Nevada in July. That allocation, along with $600 million of private activity bonds from California and a $1 billion bond allocation from the Department of Transportation, allows Edens’ company to sell up to $4.2 billion of tax-exempt bonds to fund construction of the desert line.

(For more see, Inside A Wall Street Tycoon’s Plans To Get Americans Off The Highway–And On His Trains, from the June 30, 2020 issue of Forbes Magazine.)

Tying the private train project into commuter lines serving two Los Angeles suburbs could help ensure that it eventually reaches Brightline’s target of carrying 10 million passengers a year to and from the gambling and tourist mecca.

“We’ve always had plans to extend high-speed rail west to connect directly to the L.A.-area via Metrolink. Palmdale and Rancho Cucamonga make a lot of sense and have shown strong regional support for our system,” Brightline spokesman Ben Porritt tells Forbes. “XpressWest is a catalyst that can spark the development of a car-free transportation option that will make mobility between Southern California and Las Vegas more reliable and safe.”

The company doesn’t have a precise timetable or cost estimate for the extensions, he said.

The potential XpressWest connection to Palmdale, a small city north of Los Angeles, won additional support from the Los Angeles County Metropolitan Transportation Authority on Aug. 19 when it approved reallocating $3 million from a canceled road project to instead create a development plant for the high-speed rail connection to Victorville.

Palmdale is also the site of a future stop for the California High-Speed Rail Authority, which is envisioned to someday provide rapid train travel between San Francisco and Los Angeles in under three hours. Cost-overruns and sloppy planning in the early years of the multibillion-dollar state project, approved by California voters in 2008, delayed progress and has hurt public support. Still, the program has been accelerating construction of viaducts and tunnels for future bullet trains in the project’s first phase–through California’s Central Valley, between Merced and Bakersfield–under current CEO Brian Kelly. He was appointed to lead the project in 2018.

Palmdale, about 90 miles south of Bakersfield, is planned for a future construction phase but the timing won’t be set until an environmental impact assessment is complete. Both the state rail project and Brightline’s private line will benefit from linking up and “we’ve been very supportive of that project moving forward,” Kelly tells Forbes.

“The connecting point that’s the most exciting for us and them is Palmdale,” he says. “I’m excited about what they’re doing and the prospect of having a connecting point at Palmdale that would connect with the north-south route we’re building with the sort of east-west route they’re building.”