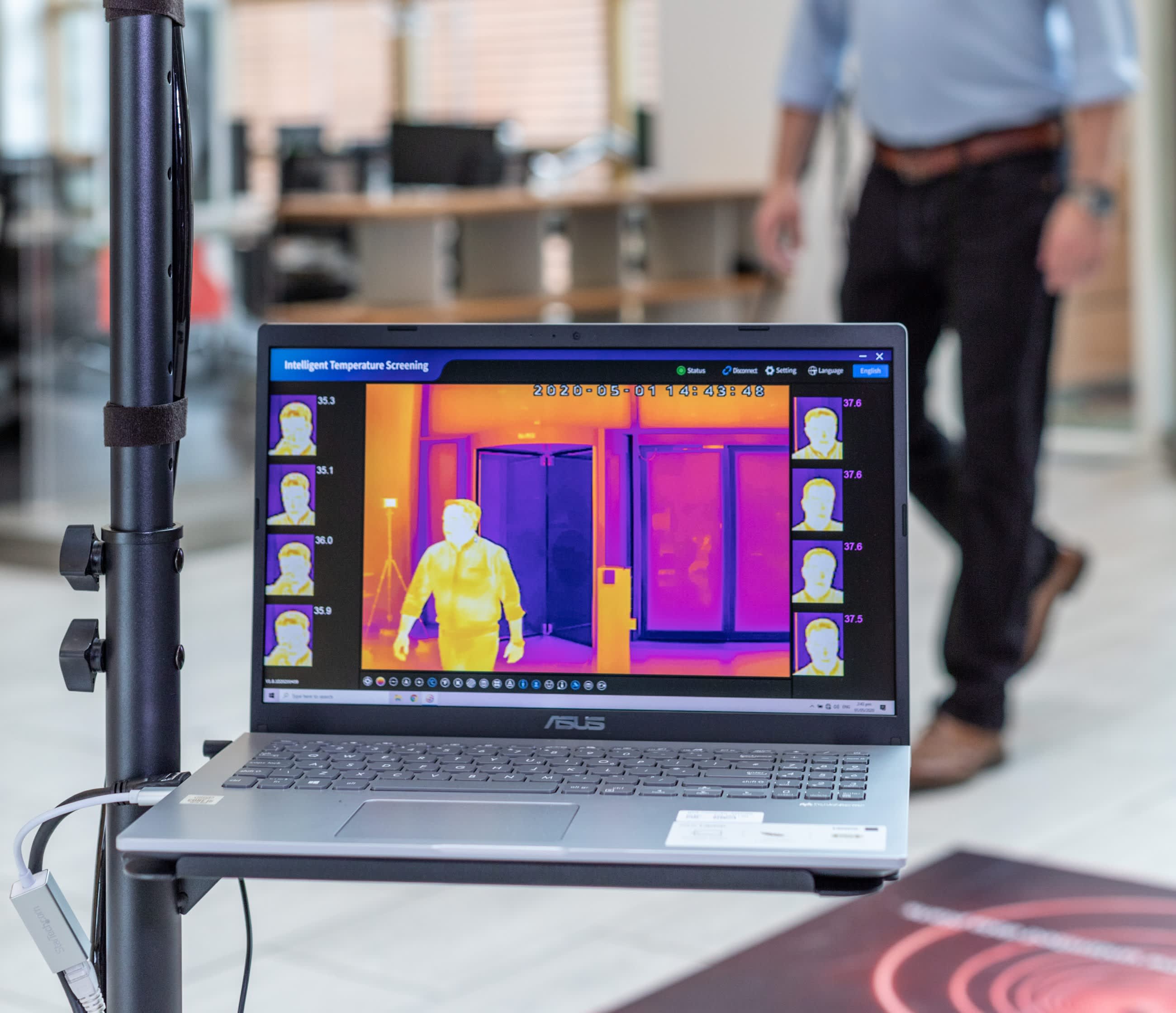 As employers around the world figure out how best to return workers to the office, tech companies are hoping that gadgets and software could help the process.

The coronavirus pandemic and resulting lockdowns have left offices around the world empty. And while there’s been lots of talk about the benefits of flexible working, there are still some workers who want to experience life in the office again.

But to do that, companies need to make sure they have strict health and safety regimes in place. Tech firms big and small have been developing everything from wearable devices to thermal imaging cameras to help businesses equip their office spaces for the future.

Tharsus, a U.K.-based robotics group, is mostly known for designing robotics and automation systems for firms like online retailer Ocado and telecommunications firm BT. In response to the Covid-19 outbreak, the firm developed wearables for workers to wear around their necks to help with distancing themselves from colleagues.

The hardware — which looks like a futuristic smart necklace — sends out alerts to wearers every time they come into close proximity with another worker. Tharsus is looking to roll the technology out in a number of workplace environments, including offices, warehouses and canteens.

U.K. robotics firm Tharsus has created wearable technology that alerts workers when they’re too close to each other.

The tech is currently being trialed at the Manufacturing Technology Centre, an independent research institute based in Coventry, England. The facility houses manufacturing titans such as Rolls-Royce, Airbus, Siemens and General Motors.

“Bump is like traffic lights, which improve safety and at the same time improve capacity,” Tharsus CEO Brian Palmer told CNBC. “Analysis of Bump traffic data enables the volume of people in the workplace to increase, safely.”

It’s somewhat evocative of contact-tracing apps, another tool that companies — and governments — have been considering as part of their reopening plans. These apps rely on Bluetooth or location data to notify users if they may have been exposed to the virus.

Consulting giant PwC, for instance, developed an app for corporate clients to track employees who come into close contact and alert human resources staff if they may be at risk of coming down with the virus. The app has been tested in the company’s Shanghai office.

However, contact-tracing apps have faced criticism from privacy advocates concerned they could be too invasive. Officials and experts have also said the apps deployed so far haven’t yet been a “game changer” in tackling the coronavirus pandemic.

U.K. robotics firm Tharsus has created wearable technology that alerts workers when they’re too close to each other.

While different from contact tracing, Tharsus’ solution is similar in that it aims to measure proximity. Bump relies on radio frequencies to send out signals to users if they get too close to each other. As far as privacy is concerned, Palmer said the tech was compliant with EU privacy laws and that data wouldn’t be shared with third parties.

“We designed Bump with this in mind and to ensure wearers don’t need to sacrifice data privacy,” he said. “All data is available to an individual business and their team members alike. Everyone can see who collected data, when and why.”

“Other app-based solutions only notify users if social distancing fails ‘after the event’ i.e. after they have been exposed to risk,” he said. “Bump provides real-time protection from the risk in the first place.”

Meanwhile, thermal imaging cameras have also been suggested as a potential way of helping bring staff back to the office. The cameras use infrared technology to detect radiating heat from a person and then estimate their body temperature.

British telecommunications firm Vodafone is deploying heat detection cameras made by surveillance tech maker Digital Barriers. The cameras are currently in use at the training ground of English rugby club Wasps, however Vodafone said they will also be used in offices, typically by an entrance or reception area.

Vodafone’s thermal imaging camera positioned by the entrance of an office building.

“The device uses both thermal and HD cameras to deliver reliable, real-time body temperature screening accurate to within +/- 0.3 degrees Celsius and can screen up to 100 people every minute,” said Anne Sheehan, director of Vodafone Business U.K.

Responding to concerns over whether the cameras could infringe workers’ privacy, Vodafone said its cameras are a “temperature screening solution only.”

“The data it gathers is only relevant at that particular point in time,” said Sheehan. “The device doesn’t include technologies such as facial recognition and it cannot be used as a tracking device.”

But like much tech being proposed to return life to some level of normality, health officials have cast doubt on the use of thermal cameras in trying to detect and contain virus cases. The World Health Organization for instance has said temperature screening alone “may not be very effective.”

And while some tech companies are figuring out ways of detecting symptoms and regulating exposure to the virus, others are seeking to eradicate it.

UV lights from Signify pictured in an office site. The Dutch firm claims its lights can be used against the novel coronavirus that causes Covid-19.

Take ultraviolet lights, which have previously been used to kill bacteria, for instance. Some firms, such as Dutch lighting maker Signify, are hoping the technology can be applied to the novel coronavirus that causes Covid-19.

The World Health Organization has warned people not to use UV lights on their skin due to the dangerous levels of radiation that they emit. But Signify aims to use the lights to disinfect surfaces in offices and other settings like schools and restrooms.

And science may be on the company’s side. Signify tested its own UV lights with researchers at Boston University, who found that exposure of the virus to UV light helps eradicate it. Signify is now ramping up production of the lights.

One trend the pandemic has accelerated is the use of software to communicate and collaborate remotely. Platforms like Zoom, Slack and Microsoft Teams have seen a surge in demand with entire workforces forced to adapt to telecommuting. Cisco’s Webex video-conferencing app saw a record 324 million users attend virtual meetings in March.

“There’s been a seismic change in the last few months in terms of working,” Chintan Patel, Cisco’s chief technologist in the U.K., told CNBC. “It goes without saying that what’s taken place has been incredible.”

The Cisco Webex app logo is displayed on a smartphone with a computer model of the COVID-19 coronavirus in the background.

The question for these platforms is whether they can continue this momentum as shelter-in-place measures ease and businesses start to reopen. Executives said there would be a continued need for such services as businesses adopt a “hybrid” approach of keeping staff at home while some employees return to the office.

Patel said touchless technology such as voice-activated intelligent assistants could help with holding virtual meetings from the office. Cisco’s video technology is also capable of measuring how many people are in a meeting, he said, adding this was compliant with EU privacy laws.

Still, it could be some time before a majority of office workers are back in the office. Many large tech companies are now offering workers greater flexibility over their working situations due to Covid-19 — Twitter has gone so far as to let employees work from home “forever.”

According to a YouGov study commissioned by identity management software firm Okta, just 29% of European workers surveyed between April and May wanted to go back to the office full-time. That figure fell to as low as 24% in Britain.

Meanwhile, 55% of workers felt they were equipped with the necessary hardware for working at home, while 56% said they had the appropriate software. YouGov surveyed over 6,000 people across the U.K., Germany, France and the Netherlands.

“If you really have to bring everyone to a meeting together, something extraordinary will have to happen,” Julien Codorniou, vice president of Facebook’s Workplace app — a rival to Slack and Teams — told CNBC. “I hope the office will be a place for more meaningful interactions.”

Finally, there’s the issue of how workers will get to the office. It’s easy to see why many people in big cities like London and New York might be anxious about the idea of taking public transport, potentially being packed in like sardines on a busy bus or subway. And driving in such areas can be far from ideal.

Several start-ups are hoping to convince authorities and consumers that two-wheel electric vehicles like scooters and bikes might be able to solve this problem. In the U.K. that’s particularly relevant, since the government has recently made it legal to ride e-scooters on roads. A number of trials are getting underway across the country.

New York City has also approved the private use of e-scooters and bikes, and will allow e-scooter operators to apply for permits in the city, with the exception of Manhattan.

It is hoped the devices will offer a safer and more environmentally-friendly alternative for people commuting to the office.

“This is about getting the public back to work moving again in a safe way,” Richard Corbett, the U.K. general manager at Swedish e-scooter firm Voi, told CNBC.

“Authorities are using the current opportunity as an opportunity for challenge,” said Per Brilioth, CEO of VNV Global, an investor in Voi.

“That’s been the ongoing trend, to reduce — not take away completely — but reduce the need for cars and fossil fuel for transportation into something that’s cleaner in every aspect.”