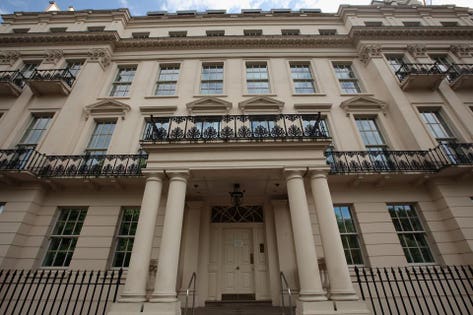 The private office of Hong Kong property tycoon Cheung Chung Kiu is under contract to purchase the U.K.’s most expensive home, located on the south side of London’s Hyde Park.

The sale price is 210 million pounds, or about $274 million, according to a report from Bloomberg citing a person with knowledge of the transaction.

That would beat the U.S. home-price record set by hedge funder Ken Griffin last year when he paid $238 million for the quadplex penthouse at 220 Central Park South in Manhattan.

From the seven-story Italianate-style mansion, it’s about a 10 minutes walk through the Knightsbridge neighborhood to Harrods, the famed department store.

No decision has been made on whether the property will remain a single-family home or be converted into luxury apartments, Bloomberg said. Based on nearby sale prices for luxury homes, a conversion could be worth as much as 700 million pounds.

The 45-room home was the London residence of former Prime Minister of Lebanon Rafic Hariri until his assassination in 2005. Following Hariri’s death, it became the residence of Sultan bin Abdulaziz, the Crown Prince of Saudi Arabia.

After the sultan’s death in 2011, it was put on the market but failed to find a buyer. In June 2015, contents from the property were sold in a two-day auction, including many of its crystal chandeliers.

The property was built in the 1830s as a row of four townhouses that were later combined. A remodel added bullet-proof windows, several passenger elevators, a swimming pool, a gym, and underground parking.

It’s located a block from the area of Hyde Park that was used for the Great Exhibition of 1851 that included the Crystal Palace, a cast-iron and plate-glass structure built to highlight the advances of the Industrial Revolution.

The Crystal Palace later was relocated to another spot in London and was destroyed by fire in 1936.