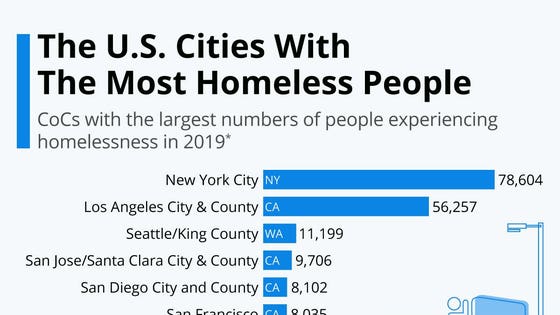 The U.S. Department of Housing and Urban Development has released its latest report detailing levels of homelessness across the United States. Its 2019 Annual Homeless Assessment Report found that there was a 3% increase in the one-night estimates of people experiencing homelessness between 2018 and 2019 despite the fact that most states recorded reductions. The national increase is primarily due to a leap in homelessness in California where it grew 16.4% between 2018 and 2019 or by 21,306 people. In terms of absolute numbers, California has more than half of all unsheltered homeless people in the country at 53% or 108,432, nearly nine times as many as the state with the next highest number. That’s Florida which is home to 6% of the American unsheltered homeless population or 12,476 individuals.

Despite several years of progress in many parts of the country, more than half a million Americans are still homeless today with approximately 63% of them staying in sheltered locations. The following infographic takes a closer look at the data by CoC – Continuums of Care that are local planning bodies coordinating responses to the problem. When both sheltered and unsheltered individuals are taken into account, New York is actually the metropolitan area with the most homeless people, 78,604. Despite that, the grim situation in California is plainly evident with six out of the top-10 CoCs with the most homeless people located in the Golden State.

Nearly a quarter of all people experiencing homelessness in the U.S. are in either New York or Los Angeles and the latter comes second on the list with 56,257 people with no home. Seattle/King County in Washington rounds off the top-3 with 11,199 while another two Californian CoCs, San Jose/Santa Clara City & County and San Diego City and County complete the top-five. Unlike New York, a significant share of California’s homeless population is sleeping rough. The research found that an estimated 71.7% of all homeless people in California are unsheltered compared to just 4.4% in New York. The two CoCs with the highest unsheltered rates are largely rural and both are also in California. Lake County in the Northwest of the state reported a 94% unsheltered rate while Alpine, Inyo and Mono Countries on the border with Nevada reported 92%.