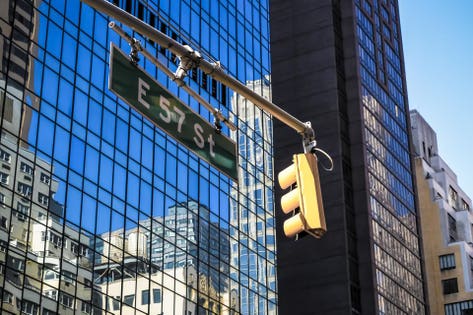 In Manhattan, pencil-thin is “in.” For models, and also for buildings such as the ultra-thin residential towers on 57th Street that made it the most exclusive address in a global ranking by Knight Frank and Douglas Elliman Real Estate.

The two brokerages ranked streets by the number of residential sales priced above $25 million during the last five years. There were 41 transactions in 57th Street’s “pencil towers” including 157 West 57th Street and 111 West 57th Street, also known as the Steinway Tower.

The total volume was $1.6 billion, for an average price of $38.5 million, the report said.

Mount Nicholson Road in Hong Kong, overlooking Victoria Harbor, was next on the list, with 35 sales priced above $25 million.

If the addresses were ranked solely by price, and not volume, Mount Nicholson would have won. There were 35 transactions with a total volume of $2.9 billion, the report said. That put the average price at $81.8 million.

The next two addresses were back in Manhattan. Central Park South was No. 3, with 32 transaction totalling $1.4 billion. That includes the $238 million sale of the penthouse at 220 Central Park South earlier this year to hedge fund manager Ken Griffin that made it the most expensive home in the U.S.

The average price for the above-$25 million sales on Central Park South was $44.9 million, the report said.

Park Avenue was No. 4 with 20 transactions totalling $860 million, putting the average at $43 million. That includes the penthouse at 432 Park Avenue, the tallest residential building in the western hemisphere, that sold to a Saudi businessman for $88 million.

London’s Grosvenor Square was No. 5, with 13 transactions totalling $591 million, putting the average price at $45.5 million.

Hong Kong’s Mount Kellett Road was next, with 10 sales at an average price of $64.8 million. It was followed by New York’s Fifth Avenue, with 10 sales averaging $55.7 million.

No. 8 was the Pacific Coast Highway in Malibu, California, where there were 10 sales at an average $49.2 million. No. 9 was Hong Kong’s Conduit Road, with 10 sales averaging $43.4 million.

No. 10 was South Ocean Boulevard in Palm Beach, California. That’s where Mar-a-Lago, promoted by President Donald Trump as the “Southern White House,” is located.

There were 10 transactions price over $25 million on the boulevard, at an average price of $34.5 million, the report said.