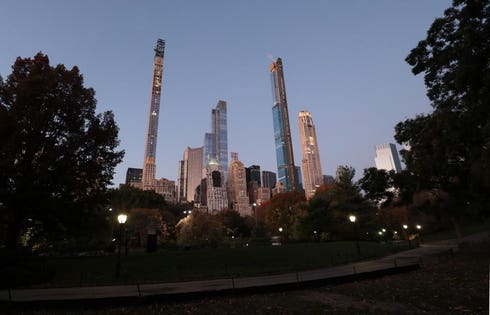 Och bought a penthouse as well as a smaller unit on a lower floor at 220 Central Park South, the Wall Street Journal reported, citing people familiar with the deal. Och recently changed his residence to South Florida to save on taxes and plans to use his new home when he visits New York, the Journal said.

The 70-story limestone-clad building designed by Robert A.M. Stern is one of the city’s new “pencil towers,” super-thin residential skyscrapers rising along the edges of Central Park.

Earlier this year, hedge fund billionaire Ken Griffin set a record for buying the most expensive home in the U.S. when he paid $238 million for a penthouse at 220 Central Park South.

While Och’s new 9,800-square-foot unit is a just pied-a-terre, it’s a trade-up from his prior New York residence a five-minute walk away: a 4,700-square-foot penthouse condominium at 15 Central Park West.

Och, whose net worth is about $3.2 billion, listed that three-bedroom unit in August for $57.5 million with Corcoran Group. It’s still on the market, described in the listing as “a meticulous work of art designed with the most discerning eye.”

The building where Och lived for more than a decade is just half the height of his new building. Another famous resident of 15 Central Park West traded up to 220 Central Park South earlier this year: the British rocker Sting paid about $66 million for a unit.

In March, Och stepped down as chairman Och-Ziff Capital Management, once the largest publicly traded U.S. hedge fund. In 2016, the firm paid about $412 million to settle a multiyear federal probe of bribery in Africa. In September, the firm rebranded as Sculptor Capital Management.