A lot can happen in a decade.

Since 2010, the S&P 500 has returned nearly 185%, an impressive gain for the bellwether stock index. While the market chugged along in the longest economic expansion in U.S. history, some stocks did better than others in the 10-year period. A lot better.

Emerging from the financial crisis, the last decade has been one of disruption. The S&P 500 only experienced two years of losses in this period of steady growth. Technology companies left others in the dust as consumers demanded convenience more than ever. The semiconductor sector was the best-performing industry of the decade thanks to the rise in cloud infrastructure and data centers. 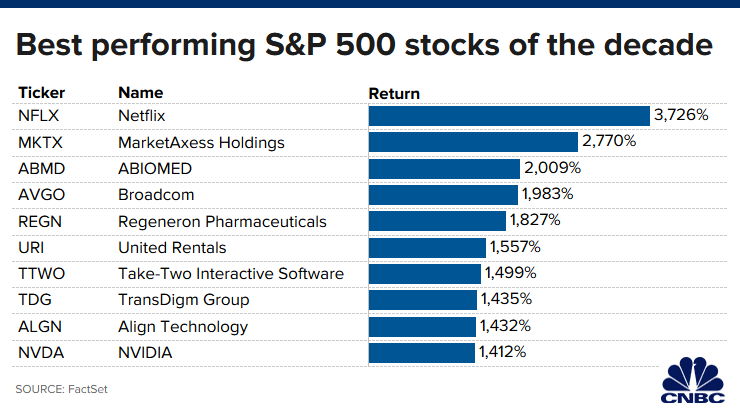 CNBC used FactSet to screen for the best-performing stocks in the S&P 500 in the past decade. The stocks on the list have the highest total return of any in the index, which includes the companies’ dividend, if they pay one.

Some themes emerge: Netflix revolutionized media. The chip industry benefited as its products went from being used in phones and computers to nearly everything. And one food company proved there’s still innovation left to do on Wall Street.

Outside the S&P 500, Domino’s technology-based approach to pizza delivery set the stage for the boom in food delivery we have today and fueled explosive gains for the stock.

Pioneer of the streaming service industry, Netflix is the best performing stock of the decade, returning a whopping 3,726.2% in 10 years. Netflix transformed from a $7 stock in 2010 to a $300 stock today. 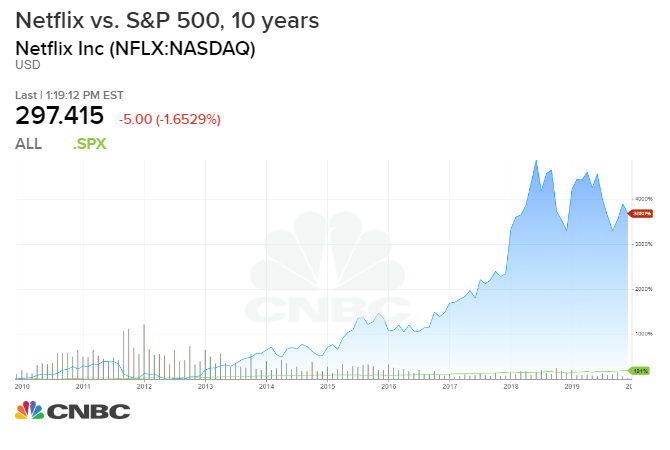 Reed Hastings’ company disrupted the way people watch television and movies and inspired companies like Disney and Apple to launch their own streaming platforms.

“Today’s world has its roots firmly with the success of Reed Hastings at Netflix and the frankly general overall arrogance and resistance to change from traditional media companies over the last 10-15 years,” Pivotal Research Group’s Jeffrey Wlodarczak said in a recent note to clients. Netflix has 166 million paying subscribers today.

Netflix, with a market value of $130.8 billion, is also one of the most-loved stocks on Wall Street. Of the 43 analysts who cover the stock, 27 recommend buying the streaming giant. Eleven analysts have a hold rating and only five recommend selling. Despite the standout run of the stock, analysts see it rallying another 20% in the next 12 months. The average 12-month price target on Wall Street is $365.07.

Semiconductor stocks are the best-performing industry of the decade, so it may not come as a surprise that Broadcom and Nvidia made the best-performing stocks list gaining 1,982% and 1,411% since 2010, respectively. At the start of 2010, Broadcom’s stock hovered around $17 per share and now sits around $327 per share. Nvidia’s stock was $18 per share at the start of the decade and closed on Thursday at $224.07 per share.

“Additionally, with 45%+ EBITDA margins, Broadcom is among the most profitable semiconductor companies, which is likely to continue to drive strong cash returns,” Bank of America analyst Vivek Arya said in a note to clients.

Little known-financial services company MarketAxess, the dominant online corporate bond trading marketplace, is the second-best performing stock in the S&P 500 in the last 10 years, returning more than 2,770% since 2010. While stocks have traded electronically since before the 2000s, the bond market is traditionally a more difficult trading asset to tap. MarketAxess’ platform allows institutional investors and broker dealers to trade bonds and other fixed-income securities.

“MKTX continues to set new volume records across all product categories as it is gaining market share in these products,” Goldman Sachs analyst Alexander Blostein said in a note. MarketAxess has a market value of $14.01 billion.

The firm has been building a client base among asset managers since it was founded in 2000, and $1.7 trillion of assets traded through MarketAxess’ trading technology in 2018. The firms biggest competitors are Tradeweb and Bloomberg.

Despite MarketAxess going from $14 a share in 2010 to $370 today, not one of the 11 analysts on Wall Street who cover it recommend buying the stock, with an average 5% downside seen in the share price over the next 12 months, according to FactSet.

Big winners outside the S&P 500 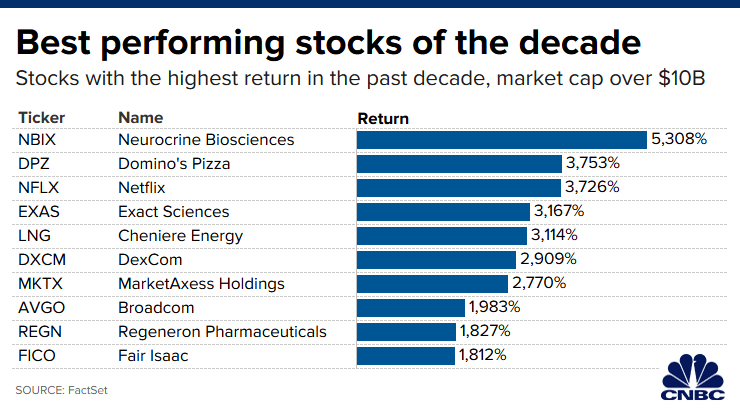 A decade of pizza

Domino’s Pizza is one of the greatest turnaround stories of the decade, and the stock price is proof. The largest U.S. pizza delivery chain has gone from a stock price below $10 a share in 2010, to around $286 per share stock today. Domino’s had a $12.13 billion market cap.

When Patrick Doyle became CEO in 2010, he presided over a turnaround that improved the taste of the company’s pizza, invested in online ordering and promotions, and powered explosive stock gains.

“Domino’s set out to reformulate what it admitted was an inadequate pizza. It was a gutsy strategy, but it worked,” said Stephen Anderson, senior restaurant and consumer analyst at Maxim Group.

Once Domino’s started to invest in marketing, employees and technology to master pizza delivery, Domino’s became the dominant leader in pizza delivery in the U.S., with about 30% market share today, according to RBC Capital Markets.

“With close to 70% of all orders now online/mobile-based, Domino’s is a tech company that just happens to sell pizzas,” said Anderson.

Looking to the next decade, investors wonder to what extent the rise of other food delivery companies like GrubHub and UberEats would impact Domino’s strong top-line growth. RBC said carryout is the fastest growing segment in pizza and that could be Domino’s next decade capitalization.

— With reporting from CNBC’s Michael Bloom.