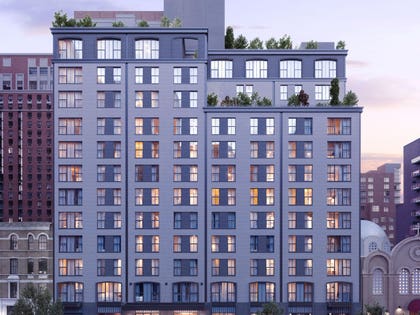 Could a street whose legacy dates back hundreds of years be the new Holy Grail for today’s higher-end condominium buyers? If a recent tidal wave of development on Brooklyn’s Schermerhorn Street is any indication, it appears everything old is new again.

The street is named for the Schermerhorn family, whose lineage dates back to the 1600s and the original Dutch settlers of what was then known as New Amsterdam. The wealthy clan, which made its fortune in shipping, bestowed its name on the street that extends blocks through a number of enclaves, from Downtown Brooklyn to Brooklyn Heights.

Formerly overlooked by buyers who focused on residential properties in either Manhattan or popular Brooklyn nooks like Williamsburg and Greenpoint, Schermerhorn Street has come out of the shadows to be rediscovered by those recognizing its many virtues.

These include near-unsurpassed location, Manhattan-bound trains from Hoyt-Schermerhorn station three stops from Manhattan’s Fulton Street Station, service by 13 different subway lines and a location that puts the street and its denizens within steps of cultural and educational gems and tempting gastronomy.

Particularly prized by buyers is the street’s head-turning historic architecture. A number of the residential structures on the byway date back to the mid-19th Century, while others sprouted prior to World War I. Peruse recent condominium sales in the neighborhood, and you’ll see in many building descriptions, “Built in 1899,” “Built in 1901,” “Built in 1847,” “Built in 1920.”

Developers haven’t missed these attributes. In recent years, they have broken ground on a flock of brand new luxury condominium towers along Schermerhorn Street.

Among them are The Symon, a boutique residential building that launched sales this fall, and 211 Schermerhorn, the creation of acclaimed architect Morris Adjimi. Nearby are The Nevins at 319 Schermerhorn and Six Ten Warren. Poised to open is The Ace Hotel, at 266 Schermerhorn. Nearby are Downtown Brooklyn, Brooklyn Bridge Park and the majestic skyline views of the Brooklyn Heights Promenade.

“Schermerhorn Street starts in the Brooklyn Heights Historic District and ends at the Brooklyn Academy of Music in Downtown Brooklyn,” says Jamie Anthony, founder of Lonicera Partners, the Downtown Brooklyn real estate investment and development firm that with Orange Management and The Davis Companies is developing The Symon.

“The street acts as a bridge between two of the most foundational aspects of what makes Brooklyn great: Idyllic residential neighborhoods and world-class cultural and commercial amenities. Because of that, Schermorn has transformed into one of the most popular and lively living destinations in Brooklyn. And we are proud to be building The Symon on such an important artery.”

Commercial jewels of which Anthony speaks include high-end Chelsea Piers Fitness at 265 Schermerhorn, popular retailers Apple, Equinox, Whole Foods and Trader Joe’s and a bevy of dining and nightlife options. Last but far from least is Barclays Center, home of the NBA’s Brooklyn Nets and some home games of the NHL’s New York Islanders.

With a location on Schermerhorn Street adjacent to the Brooklyn Heights Historic District, The Symon, says Anthony, “is ideally situated to benefit from the famously picturesque residential atmosphere of Brooklyn Heights, along with seamless access to all the amenities of Downtown Brooklyn, including the best dining and retail options . . . parks and green space, as well as the best transportation hubs in New York City.”

It’s all part of the metamorphosis of one of the Borough of Churches’ most prized byways, an artery developers and buyers are at long last lifting out of the shadows.