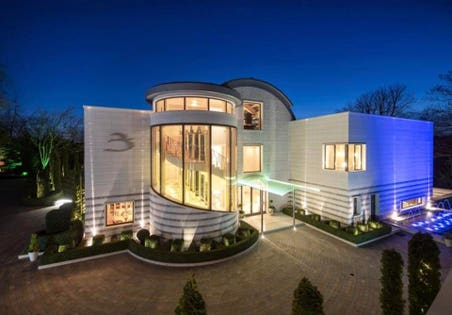 On the eve of a general election in the United Kingdom that will almost certainly impact the direction of Brexit as well as London’s property trends (which had been on the decline), a home in the north of London is remaining bullish on finding a buyer. Located in Highgate, with unobstructed views of the popular Hampstead Heath park, this 10-bedroom house called Heathfield House sits on two acres of land (rare for being so close to the city) and is asking £40 million (approximately $52.5 million USD). Highgate has been home to a few celebrities, including Kate Moss, Jamie Oliver and Jude Law, and is also the location of the largest private home in London—a 90,000 square foot palatial spread called Witanhurst. Single family homes prices here average about £3.5 million (approximately $5 million) so Heathfield House is the highest asking on the market by far. The home belongs to Aleksandr Bronstein who made is wealth in the metal industry and is the chairman of the Solway Investment Group, with mines around the world that largely focus on nickel.

The modern design of the homes relies on curved walls and sculptural elements, such as a dramatic staircase and mullioned floor-to-ceiling windows to create a contemporary look. The home also comes with a glass elevator and many reflective surfaces to add to the shimmer factor. Here walls lined with fabric complement the mirrors on the stairwell.

A one-of-a-kind art installation hangs over the dining room and provides a way to bounce light around the double-height room from the lighting fixtures concealed behind the display.

An indoor pool looks out on to the backyard.

Next to the pool are the these futuristic lounge areas with porthole windows reminiscent of spaceship and recessed lighting that looks like stars in the sky.

The home also comes with a curved indoor pool that opens out to the landscaped grounds, a tennis court, billiards room, spa, home gym and separate guest house measuring about 4,400 square feet.

The listing is jointly held with Sotheby’s International Realty and Knight Frank.