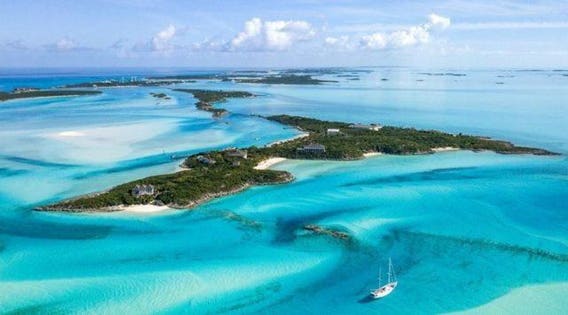 Little Pipe Cay, the Bahamian island developed by billionaire Michael Dingman who died in October at the age of 86, is listed with Knight Frank for $85 million.

Dingman, the former president of international investments firm Shipston Group Ltd. and longtime director of Ford Motor Co. and Time-Warner Inc., built five houses for his family and guests on the 38-acre island.

Neighbors include movie star Johnny Depp, who owns nearby Little Hall’s Pond Cay, and billionaire Ed Bosarge, co-founder of electronic trading firm Quantlab Financial LLC, who owns Over Yonder Cay. Even more exciting, it’s about two miles from Big Major Cay, where people go to swim with the wild pigs who live on the beaches.

Don’t knock it till you’ve tried it, or at least watched it on YouTube. For many years, my go-to stress reliever is watching a three-minute YouTube video titled “Bichon Puppies in the Bahamas.” That’s where I learned about the wild pigs on Big Major Cay. There might be a few other stressed out people in the world because the video has almost 190,000 views and I only account for a few hundred of those.

If you’re thinking of purchasing Little Pipe Cay, you’re going to need a boat. It’s about 270 miles southeast of Miami. Assuming you have a motor yacht with a typical cruising speed of 20 knots, it would take about 12 hours in clear seas. Or, you could take a commercial flight to Nassau, about 75 miles from Little Pipe Cay, or George Town, about 69 miles away, and charter a boat or seaplane to finish the journey. Although, once you’re there, you’ll want your own boat to explore the other islands (and visit the pigs, of course).

Each Colonial-style house on Little Pipe Cay has sea views and its own private beach. Housing for staff, storage, and utilities such as generators are discretely hidden away on one end of the island.