Emerging markets are feeling the heat. China is in a bear market, Brazil is closing in on one, and the EEM emerging markets ETF could close out its worst quarter in nearly three years on Friday.

“There’s really a time to own EEM and it’s time not to own EEM,” Piper Jaffray’s chief market technician Craig Johnson told CNBC’s “Trading Nation” on Thursday. “Our rising dollar is going to be an issue for EEM in here and it looks like to me you got probably another 12 percent downside before you get down to a material support area.” 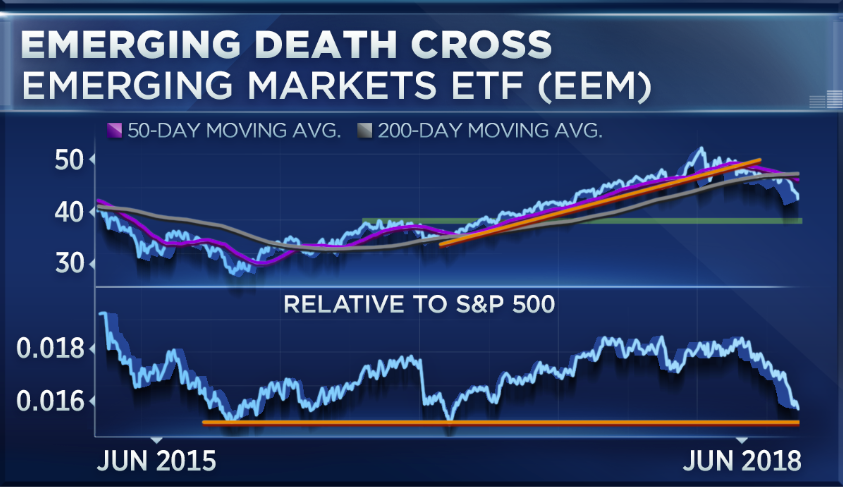 The EEM ETF has also entered a death cross, a technical red flag for Johnson. A death cross marks the point on a chart where a longer-term moving average, such as the 200-day, breaks above a shorter-term moving average, such as the 50-day. The technical indicator demonstrates a sharp breakdown in a security’s price and often prefaces further downside.

“I’d be trimming that back or reducing the position, waiting for it to get down to a nice base, find support at that base,” said Johnson. “When the trend turns, and you start to hear about an improving fundamental backdrop, or the dollar starts moving in a more favorable direction for EEM, then I would be increasing my exposure.”

Others aren’t as bearish.

The promise of future growth in emerging markets is too valuable for Strategic Wealth Partners’ president Mark Tepper to bet against.

“The emerging market consumer is one of the most powerful forces in investing,” Tepper said on Thursday’s “Trading Nation.” “In 15 years, 80 percent of the world’s middle class is going to be outside of the U.S. and Europe, and consumer spending in emerging markets is expected to rise by over $20 trillion by 2020 ,so investors can’t afford to not own emerging markets.”

The EEM ETF tracks large- and mid-cap equities in emerging markets, including Alibaba, Taiwan Semiconductors and Samsung. The ECON ETF holds consumer-focused names like JD.com and Yum China, while the DGS ETF holds names like Truworths International and Foschini Group.