Netflix’s global subscription expansion as well as gradual pricing increases put the company’s stock on track for even more upside over the next year, according to Macquarie Research.

The firm raised its price target on the online video streamer’s shares to $430 from $336, reiterating its outperform rating and citing uplift in subscriptions to higher tiers as people buy more high-end televisions and demand video of higher quality.

Netflix shares rebounded in premarket trading Thursday, up 0.7 percent. The high flyer fell 2.25 percent on Wednesday and is down 5 percent over the last five days as investors take profits into the end of the quarter. Netflix stock has still doubled on the year.

“Penetration rates are rising, and Netflix enjoys pricing leverage as well as an underlying rise in average revenue per unit from tiering up both in the U.S. and internationally,” analyst Tim Nollen said in a note to clients Thursday. “Plus Netflix is well-entrenched with telco and pay TV distributors worldwide, which adds subscribers and minimizes churn.”

“We can’t know what the right numbers to use are but history has shown Netflix has beaten all prior estimates – so numbers can go higher,” he added. 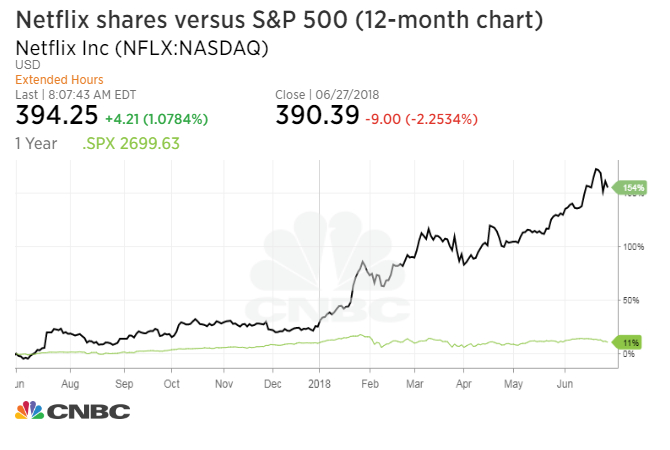 As one of the largest technology companies on Wall Street, Netflix stock has enjoyed significant upside over the past 12 months, even when compared to other industry giants. Company shares have scaled more than 150 percent over the past year, well ahead of Facebook’s 27 percent gain and Google-parent Alphabet’s 16 percent climb.

For his part, Nollen believes international subscriptions reaching 113 million by 2019 and raised his 2019 earnings per share estimate to $5 from $4.44, significantly higher than consensus estimates provided by FactSet.

Still, concerns remain over growing competition from Amazon and The Walt Disney Company, both of which have bolstered their own online offerings over the past two years. Chief executive Reed Hastings said in April that the company still has a long road ahead to compete with the likes of YouTube, and noted that Netflix’s ability to raise prices relies on its ability to provide unique value.

“If we get lazy or slow, we’ll be run over just like anybody else,” Hastings said at the time.

Macquarie’s Nollen, who upgraded his rating on shares of Netflix to outperform back in January, said he believes any serious competition is still a ways off.

“The marketplace is also seeing ever-increasing volumes of high-quality original content released by competing platforms and we weigh this in considering whether consumers could develop some reluctance to take on too many subscriptions,” the analyst wrote. “But we think any real threat from competing over-the-top services is still some way off – at least until Disney’s service comes online in fall 2019 – or until recession hits and causes consumers to pare down.”