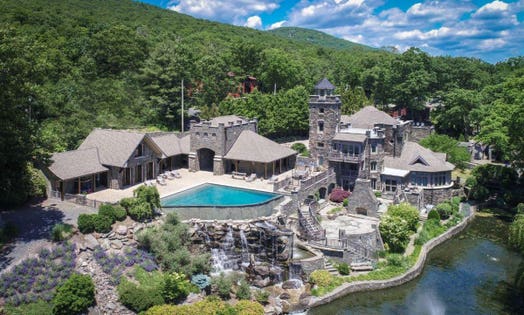 Derek Jeter broke lots of Major League Baseball records during his two decades of wearing the pinstriped uniform of the New York Yankees. Almost four years after retiring, the All-Star shortstop is going for a real estate record.

Jeter, currently in the midst of his first season as CEO of the Miami Marlins, last week listed his 24-room castle in upstate New York for $14.75 million. If he gets that price for the six-bedroom home, it would far surpass the standing record Zillow.com cites for the town of Greenwood Lake, New York: $1.67 million for a different property in 2010.

Jeter has an emotional connection to the home. The Medieval-style stone castle, built in 1903 with turrets, buttresses and battlements, had fallen into disrepair when he bought it 15 years ago for $425,000 and began pouring millions of dollars into renovating it. Jeter’s grandfather, Sonny Connors, grew up there.

The construction restored the caste “beyond its original grandeur,” according to the listing on Realtor.com.

The home, known locally as Tiedemann Castle, has 700 feet of shoreline on Greenwood Lake, about an hour north of New York City. To shorten the trip from Manhattan, there’s a seaplane base less than a mile away in the New Jersey town of West Milford. On the southern tip of the lake, there’s a regional airport with a runway long enough to handle private jets.

The property has four kitchens, 12 bathrooms, a four-car garage, a boathouse, and a five-story stone turret topped by a lookout. There are tiered formal gardens, waterfalls, and an infinity-edge pool overlooking a lagoon with a fountain spraying water more than 30 feet in the air. A small-scale replica of the Statue of Liberty faces the five-mile-long lake.

Jeter’s castle was listed on June 18 with Diane Mitchell, a broker with Wright Brothers Real Estate in Nyack, New York. In a phone conversation, Mitchell declined to comment.

Greenwood Lake was a fashionable summer retreat eight decades ago that drew entertainers such as Greta Garbo and Gypsy Rose Lee. Another legendary player for the Yankees, George Herman “Babe” Ruth Jr., vacationed there in the 1930s and 1940s, and was known for piloting his custom-built mahogany speedboat to various watering-holes around the lake.

Some of Ruth’s favorite haunts, like the New Continental Hotel about two miles from Jeter’s castle, are still open for business.