North Korea could account for up to 24 percent of the Korean Peninsula’s total gross domestic product in 20 years under reunification with the South, UBS estimated in a report this week. The rogue state currently accounts for 1.1 percent of the regional economy.

Tensions around the nuclear state have eased after North Korean dictator Kim Jong Un met with the leaders of South Korea and U.S. While it’s far from clear whether the two halves of the peninsula will ever reunify, they may be closer to establishing two peaceful, independent states, which by UBS’ analysis would also help growth.

North Korea could also then utilize its natural resources and well-educated labor force, the analysts said, noting compulsory secondary education. In 2016, nearly half of economic growth came from the industrial sector, just under a third from services, and about a fifth from agriculture, the UBS report said. 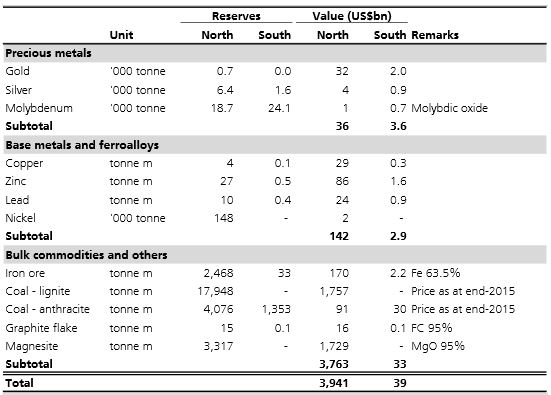 North Korea remains tiny and backward. Its centralized economy is the only one whose income level has fallen over the past 30 years, for a GDP of under $17 billion versus Vietnam’s $205.3 billion in 2016, according to UBS. Survival is highly dependent on China, and sanctions to counter North Korea’s nuclear threat have put further pressure on the economy.

Nearly 40 percent of North Korea’s 25.5 million people live in poverty, according to the World Poverty Clock.

“Is it possible at all for North Korea to deliver such an astonishing growth performance?” the UBS analysts said. “It will be very challenging; but taking all the favorable conditions discussed above into consideration, we don’t think it’s necessarily impossible, although achieving it will likely require much more than just North Korea’s own efforts.”

The analysts assume South Korea would contribute much of the initial foreign investment, and incur cumulative costs of 10.4 percent of GDP in a two-state result, and 31 percent of GDP under reunification. Overall, that would take North Korea’s share of the peninsula’s GDP from 1.1 percent to 15.2 percent or 23.5 percent in two decades, respectively.

The UBS analysis counts 20 years from the beginning of any possible normalization of North Korean economic relations with the rest of the world — a highly uncertain outcome.

Satellite images indicate North Korea is upgrading a nuclear research facility, according to a report Tuesday from analysis website 38 North. The visible additions come despite dictator Kim Jong Un’s commitment to complete denuclearization at a historic summit with President Donald Trump earlier this month. The report did note the construction at the facility should not be linked to the denuclearization pledge, and that no change to the status quo is expected unless Pyongyang issues specific orders.