Just four months after taking the helm as CEO of Chipotle Mexican Grill, Brian Niccol is scoring big with investors.

The former Taco Bell CEO’s appointment has resulted in a nearly 60 percent bump in the company’s stock since it was announced in February, and that could just be the beginning. Niccol is set to unveil his vision for turning around the beleaguered burrito chain Wednesday after the bell in a special investors call. Up until now, Chipotle’s massive stock move has been based solely on Niccol’s reputation.

“The stock move has been about the potential for new leadership to recover the brand’s allure and the performance that for years made Chipotle one of the best performing restaurant companies,” John Zolidis, president of Quo Vadis Capital, wrote in a research note Monday. “Now we will finally get to hear just how Mr. Niccol and his new team are going to make it happen.” 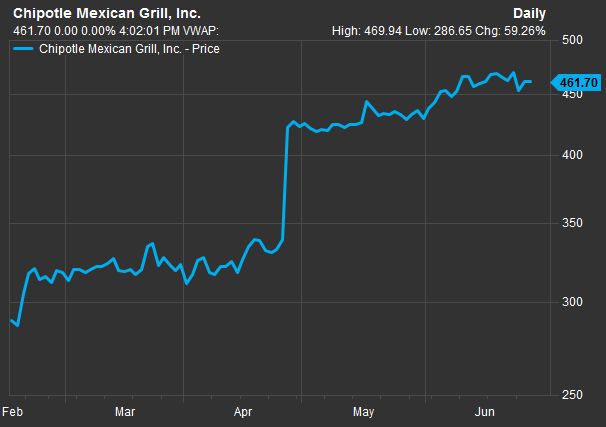 He is known for his marketing prowess and technology innovation, two key areas that have not been a top priority for Chipotle. At Taco Bell, he introduced mobile order and pay, repositioned the Mexican chain as a lifestyle brand and pushed for more ingenuity in the kitchen.

Niccol has said Chipotle will be focusing heavily on digital, marketing and menu innovation. He told investors that he would share more detail about Chipotle’s plan during the call Wednesday.

Chipotle has struggled to regain customer confidence after a series of foodborne illness outbreaks nearly three years ago. Ahead of those events, the stock peaked on Aug. 5, 2015, at $758.61. But shares now are trading about 40 percent lower. Its market capitalization at that all-time high was $23.6 billion, nearly half its current $12.8 billion. 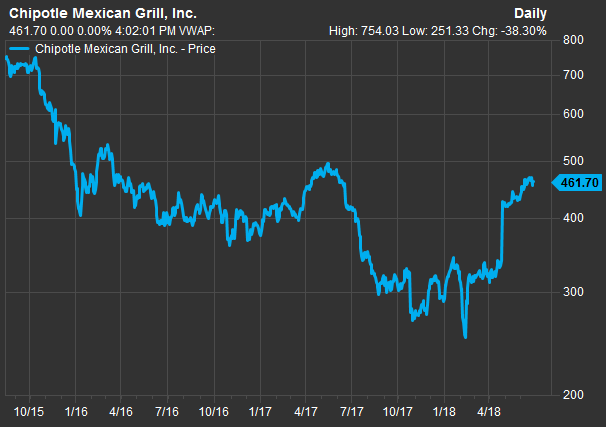 But the stock fell to its lowest level since food safety issues on Feb. 13, just a day ahead of Chipotle’s announcement that Niccol would be its new CEO. At that time, the stock was at $251.33 per share.

During midday trading Wednesday, the stock was trading around $460 per share.

Niccol, 43, came to the restaurant industry with an engineering degree, an MBA in business and a 10-year stint at consumer products giant Procter & Gamble.

At P&G he made a name for himself for his work in brand management after he launched a Scope mouthwash campaign that sent animated kisses to customers via email, according to the Los Angeles Times. This stunt was the first of its kind.

This technological and marketing innovation was not a one-off for Niccol. In 2005, he moved to Yum Brands, first taking on several posts at Pizza Hut before transitioning to Taco Bell in 2011.

Once there, Niccol introduced mobile ordering and payment across Taco Bell’s 7,000 locations in the U.S. and reached an agreement with franchisees to finance new tech initiatives, including self-serve kiosks and expanded delivery.

“We always aim to stay relevant with changing consumer tastes and trends, whether that be creating innovative menu items or offering the latest technology that connects customers to our brand when they want it, where they want it,” Niccol said in a statement at the time.

While at Yum, Niccol also made investments in Grubhub and worked with companies such as DoorDash. These connections could be a boon for Chipotle as it seeks to compete with other fast casual restaurants and quick-service chains that are steadily rolling out delivery initiatives. Chipotle has lagged rivals such as Panera Bread in adopting new technology.

Niccol has already experienced the hiccups associated with adopting new systems, and he’s not shied away from being one of the first to make a move. At Pizza Hut, Niccol launched online ordering, realizing that it had two major benefits: accuracy and convenience. At the time, selling pizza online was only being done by a company in New Zealand, according to the Los Angeles Times.

“Today, all the big pizza companies are huge in the online space,” he told the Times in 2015. “It just shows the power of technology.”

Niccol isn’t just a tech guru. When he moved to Taco Bell he changed the company’s slogan from “Think outside the bun” to “Live Mas,” the Times reported.

This rallying cry for innovation was just the beginning. Niccol would go on to reposition the fast-food Mexican chain as a lifestyle brand, launch the chain’s breakfast offerings and push for more ingenuity in the kitchen.

He was the driving force behind some of Taco Bell’s most wildly successful limited-time menu offerings, such as the Quesarito, Naked Chicken Chalupa and Nacho Fries. He’s also the reason Doritos Locos Tacos, which started as a limited-time-only offer, have graduated to a fixture on the fast food chain’s menu.

Niccol is known for encouraging employees to pitch ideas. According to The Wall Street Journal, Niccol once visited a Taco Bell and saw that employees were using tortillas to make miniature wraps. This became the inspiration for Taco Bell’s crunchwrap sliders.

“Taco Bell’s sales were up 5 percent last year, growing nearly $500 million, and Niccol’s been instrumental in looking at new avenues for growth — like breakfast — and has overseen the chain’s menu innovation activities, which have really helped drive traffic and sales growth,” David Henkes, principal at Technomic, told CNBC via email.

The hope is that Niccol can bring these innovations to Chipotle.

“Based on his track record of success in leading Taco Bell (where he has served as CEO since January 2015) and a range of other consumer-focused businesses (e.g., Pizza Hut, multiple brands at Procter & Gamble), we believe Niccol brings highly relevant skill sets in the areas of marketing and operations that can help CMG to address the primary issues that have weighed on traffic trends since the late-2015 food safety incidents,” David Tarantino, analyst at Baird, wrote in a research note Wednesday.

A person familiar with the matter told the Journal that Niccol plans to use social media to make Chipotle “more youthful and culturally relevant.”

Taco Bell has thrived on tongue-in-cheek Twitter posts, partnerships with brands such as Forever21 to deliver a limited-time clothing line, and quirky marketing, such as its trailer for “Web of Fries,” which it used to promote its new Nacho Fries menu item.

“We expect that Mr. Niccol will lean on his past success driving sales at Taco Bell with breakfast, aggressive value, limited-time-offers and compelling marketing to help improve trends at Chipotle,” Peter Saleh, analyst at BTIG, wrote in a research note.

Neil Saunders, managing partner at GlobalData, expects Niccol to bring both operational discipline and fresh thinking to Chipotle at a time when it needs it most.

“Investors will be relieved to have stability at the top and, all being well, this should usher in a less dramatic period for the company,” he said.