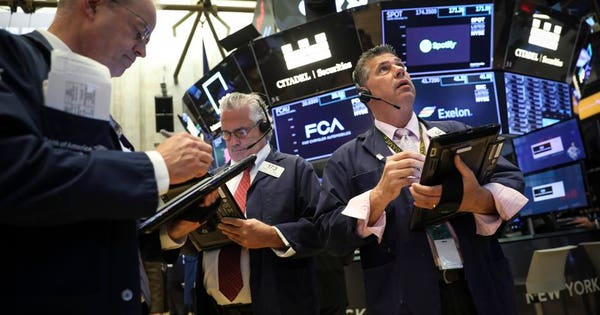 The stock market was hammered by trade tariff threats again this week, a frequent occurrence during this administration. Based on last week’s public comments, some Republican representatives are now becoming more worried. Without any concrete policy changes actually occurring, no one can be sure whether the threats are real, or just part of the negotiation strategy. 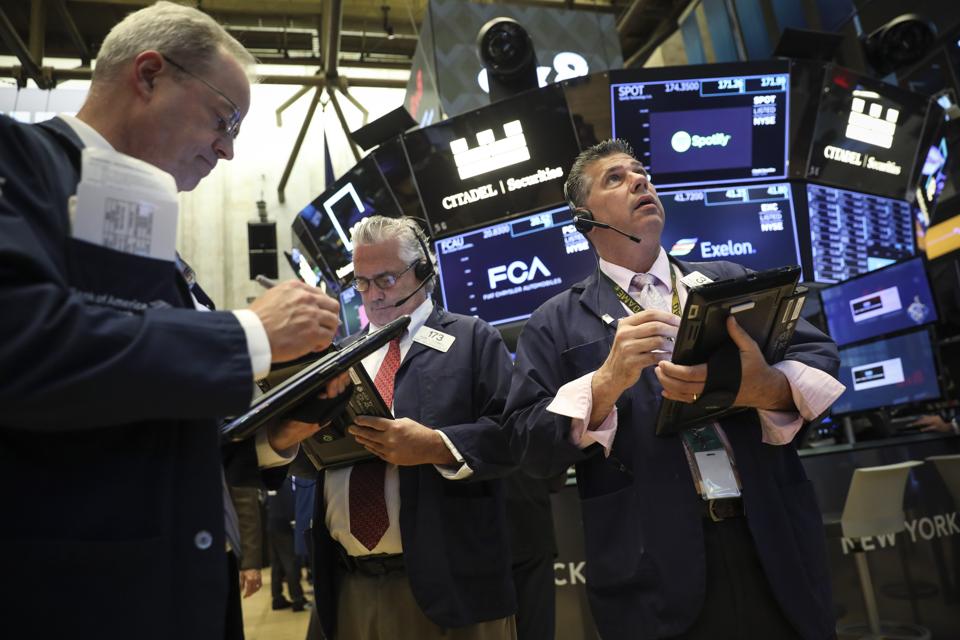 The Dow Industrials managed to close higher on Friday, avoiding the longest daily losing streak since 1978. Then, the Dow closed lower for eight days in a row, and a losing day on Friday would have been nine days in a row.  Again, this kind of streak has not happened since February 1978.

The weak performance by the Dow Industrials, and its market-tracking ETF, the SPDR Dow Jones Industrials Average (DIA), is consistent with the downtrend in DIA’s relative performance against the S&P 500 (line c), which peaked in February. It has been signaling since then that the DIA would be weaker than the S&P 500 and Spyder Trust (SPY). The sharp drop of the RS below its WMA (see arrow) on June 14 was a sign that it was going to get even weaker not stronger.  The lower boundary of the trading range for DIA (line b) is now at $233.62.

Even though the first tariffs are scheduled to take effect July 6, there is uncertainty over which tariffs will actually be enforced. Therefore, it is difficult to determine what impact they will have on the economy and the stock market. As the rhetoric continues between the US, China, Canada, and the Eurozone markets, more economists are expressing their views on what these tariffs might mean.

Some of these views were expressed recently in this article “The economy is cruising. Will Trump’s tariffs knock it off stride?” from the Washington Post. Some economists are concerned that the trade conflict could offset the economic benefit of the growing US economy and the tax cuts. If the threatened tariffs on China are implemented, then economists like Moody’s Mark Zandi fear that “the nine-year economic expansion would veer into recession”.

Many of the world’s central bankers met last week in Portugal, and they also expressed their concerns. European Central Bank President Mario Draghi cited that past trade disputes had been overwhelmingly negative for the economy, and said that there was “no ground to be optimistic” about the current trade tensions.  Some market’s segments are already reacting, as shares of Mercedes Benz and Fiat both dropped over 4% on concerns over what the tariffs could do to profits of the automakers.

As many of you may be aware, President George W. Bush also implemented tariffs back in 2002, on imported steel. As discussed in a March 2018 Bloomberg article, the policy did not have the desired impact, and was ended early in late 2003. A look at the charts from that trade dispute could provide some idea of the potential effects of President Trump’s trade war.

In 2002, the NYSE was already in an established downtrend, signaled by lower lows (line b) and lower highs in the NYSE. The NYSE Composite rallied for a few weeks after the tariffs, but it failed well below its major downtrend (line a). By late July the NYSE had dropped over 30%.

Right now, the economy is still acting strong, consumers are optimistic, and technically the stock market is in a positive trend. Market action, however, is cyclical, so eventually these positive trends will turn negative. What signs should investors look for to warn them of a change in these trends? There are three trends that I feel investors can monitor for an early warning of an imminent recession and a bear market.

The first sign to look for is deterioration in the consumer sentiment, as the consumer plays an important role in the health of the economy. I never recommend basing decisions on individual data or even several data points, Rather, one should monitor the overall trend. One of my favorite data series on Consumer Sentiment is from the University of Michigan, as each month there is both a mid-month and a final reading.

This chart of the Consumer Sentiment is from the Federal Reserve Bank of St. Louis, and contains the monthly data going back to 1992.  The December 1992 reading of 91 confirmed a new uptrend. The strong uptrend (line a) was not broken until October 1998, when a large hedge fund nearly collapsed.

The sentiment made a new high on January 2000, but then formed a lower high in May. On the chart, the gray area shows that it was plunging for several months before the start of the recession in March 2001. By the time the steel tariffs were announced in March 2002,  sentiment, too, was already in a solid downtrend.

Though the recession ended in June 2009, the Sentiment had a secondary low in August 2011 when the US debt was downgraded, and the downtrend was not overcome until June 2013. The current uptrend (line c) connects the 2013 and 2016 low, and a drop below 93 would violate this uptrend.  The mid-month reading for June, released on June 15, was 99.3.

There are several ways to measure the overall health of the economy. I follow such well-known measures as the ISM Manufacturing Index and the Chicago and Philadelphia Fed Business Surveys, to mention just a few. For a composite reading, I follow the Leading Index for the United States from the Philadelphia Fed and the Conference Board’s Leading Economic Index (LEI), which has a different composition. I look for poor performance by these two composite indexes as the second warning sign of a bear market.

Prior to the last recession, the Index peaked in January 2006, and just seven months later it had dropped sharply forming a new downtrend (line c).  In January 2007, the Index formed a much lower high (line b) before dropping for the rest of the year. This coincided with similar negative signals from the Consumer Sentiment.

Currently the Index shows a long term level of support (line d) that corresponds to the June 2011 and the September 2017 lows. A drop below this level for two consecutive months would be a warning that that the economy was topping out.  This move should be confirmed by a drop in the ISM manufacturing Index below 50, as well as deterioration of other key economic measures that I discuss regularly.

And lastly, the most important warning of a bear market will come from advance/decline analysis. The monthly NYSE Advance/Decline Line will typically make a high before the price averages, which was the case in 2007. The A/D line formed a high in May 2007 (point 1), but then in October 2007, when the NYSE Composite was making a new high, the A/D line was lower (point 2).

This was then confirmed by a drop below the WMA in December 2007 (point 3). Right now, though the monthly NYSE A/D line did decline in February 2018, it turned up in March and has made new highs in April and May.

In summary, for warnings of a new bear market, here are the three indicators you need to watch each month.

In looking back at bear markets since the 1960’s, the weekly A/D lines often give strong warnings before the monthly analysis turns negative.

The weekly chart of the Spyder Trust (SPY) above reveals that the Friday close was below the prior week’s doji low at $273.35, therefore generating a weekly doji sell signal. This is a sign that last week’s correction can go a bit further before the rally from the April low resumes.

The completion of the weekly flag or continuation formation (lines a and b) is still the dominant technical development, so a further correction should be well-supported. The rising 20-week EMA at $269.26 now represents strong support just 2% below Friday’s close.

The weekly S&P 500 A/D line made a new high just a week ago, so there are no signs of an intermediate term top.  The A/D line has strong support at the January and March highs (line c) as well as the rising WMA.  There is now major A/D line support (line d). A drop below this level, even without the formation of any negative divergences, would be a sign of weakness.

The small cap iShares Russell 2000 (IWM) was barely higher last week, closing near the week’s lows. The rally early in the week took IWM to a new high at $170.20, as it appears some money managers were scrambling to get a small cap position before the end of the quarter. The weekly and daily studies are positive, but IWM is overdue for a pullback.

The crude oil market was nervous last week, as many feared OPEC would raise production.  The OPEC announcement on Friday boosted prices, and on Saturday, Reuter’s announced that “Russia and other oil-producing allies” would increase output in July, but no specifics were given.

The August Crude oil futures were up over $3 on Friday, as the oil stocks and ETFs were very strong. My favorite oil-trading ETF, the United States Oil Fund (USO), was up 5.3%. On a technical basis, crude looks good, as the pullback from the May high held above the 61.8% Fibonacci support at $62.29. The daily OBV has been positive since early in the month and has turned higher. The Herrick Payoff Index (HPI) moved sharply above the zero line and its downtrend (line a). This confirms bullish money flow.

What to do? The market acted a bit tired last week and trade threats are likely to pick up again next week, which could trigger some more profit taking. The strong readings from the weekly studies indicate that this should be a buying opportunity for those without long positions in equities.

The global ETFs were discussed last week, and as expected they dropped even further last week. This current decline is likely to be a buying opportunity, but despite the increasing bearish sentiment, there are no signs yet of a bottom.

In my Viper ETF Report and the Viper Hot Stocks Report, I provide market analysis twice a week with specific buy and sell advice. New subscribers receive five trading lessons for just $34.95 each per month.