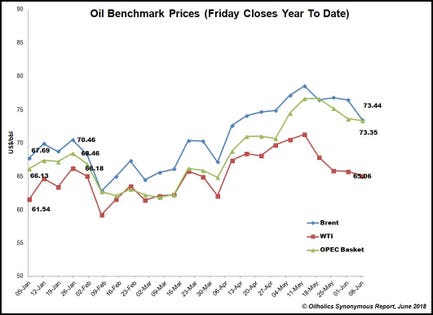 Towards the end of 2017 and for much of first quarter of this year, both oil futures benchmarks – i.e. Brent, the global proxy gauge, and WTI, the US benchmark – oscillated in very predictable ranges marking a gradual uptick to sub-$70 per barrel for the former, and sub-$65 for the latter.

India’s rising demand and China’s still relatively robust importation levels ensured a drop below $40 needn’t be feared. At the same time, a collective production cut deal of 1.8 million barrels per day (bpd) between oil cartel OPEC’s 14 members and 10 non-OPEC producers, brokered by Saudi Arabia and Russia – currently scheduled to run through the end of 2018 – kept prices at relative highs but well short of three-figures last seen around mid-2014 (see below).

Yet, predictability is not something that makes money for speculators. So at the first sign of geopolitical strife they pounce regardless of wherever the market fundamentals might be. Events at the start of the second quarter of 2018, and the weeks that followed gave them that opportunity. There was the issue of air strikes on Syria. It was followed by the up-scaling of diplomatic tensions in the Middle East, problems in Venezuela and Nigeria, and finally President Donald Trump’s unilateral decision to reimpose sanctions on Iran.

Of course, a little help from OPEC, which lacks an exit strategy to its cuts program, also played its part. Murmurings started to surface about many members of the cartel calling for a rolling over of the cuts. As the so-called oil rally market rally started taking shape in early April, money managers, especially hedge funds, piled in ever greater numbers with long calls thereby extending a price uptick that dragged Brent above $80 to levels not seen since November 2014.

Outlandish claims begin to surface. Take the case of Pierre Andurand, whose Andurand Capital Management is often bullish on oil and has been down on its luck for the first quarter of 2018, according to Bloomberg. In a succession of now deleted tweets, Andurand quipped that concerns over lower investment in upstream oil projects and their lead times over fears of peak demand might bring the largest supply shock ever pushing prices to $300.

Andurand’s claim maybe outlandish, but he is not alone in talking up the direction of the oil price. You can’t blame speculators for speculating; it is in their very nature. They hope that a rally can take hold, so that they make money on the way up as well as down. But what really helps their cause is the presence of market commentators some cynics choose to describe in a Leninist way as money managers’ “useful idiots.”

I prefer to call them False Prophets – the very sort who hit the airwaves and wires putting out predictions, not based on the wider macro picture, but on what’s most sensationalist and suits the narrative of the speculators, seamlessly switching from bullish to bearish in a matter of few weeks, and in most cases unchallenged by the very networks they’ve given their price prophecies on over a very short window of time.

Their role – to convince the average Joes and grandma Milly(s) watching the networks, listening to predictions, and having a punt with their own money, something money managers mostly do with other peoples’ money.

You’ll come up with a plethora of articles and video clips of market commentators putting forward an argument for precisely how $100 could happen or is imminent. Now, rewind your timed search back to a time when the oil market was decidedly bearish for a period, as were the money managers. Perhaps the first quarter of 2016, say two weeks either side of Friday, January 15, 2016, when Brent closed at $29.25, even lower than the $29.72 WTI ended up that day. Results would reveal many of the same commentators and avenues making equally sensational bearish predictions of a $20 oil price.

As was the case then with extremely bearish forecasts, and is the latest case with exaggerated bullish forecasts of recent weeks – both were wildly off the mark, and meant for public consumption, and of course, for a limited time only. Anyone remember Goldman Sachs’ prediction of a $200 oil price back in March 2008? I still do, but here’s a refresher courtesy MarketWatch if you need one. Instead, oil subsequently fell below $40, as the U.S. subprime loan crisis soon morphed into a global financial crisis.