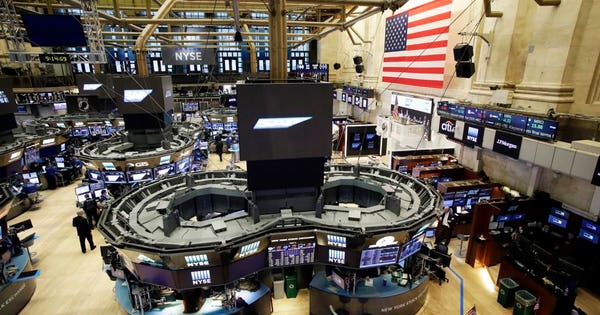 The stock market had a mixed close last week, as despite the apparent reduction of global tensions, the new $50 billion in tariffs was not reassuring to many investors. However, despite it all, bullish sentiment remains on the rise. According to the latest survey from the American Association of Individual Investors (AAI)) the bullish % rose 5.8 points to 44.8%, the highest reading since the February 15th reading at 48.5%. 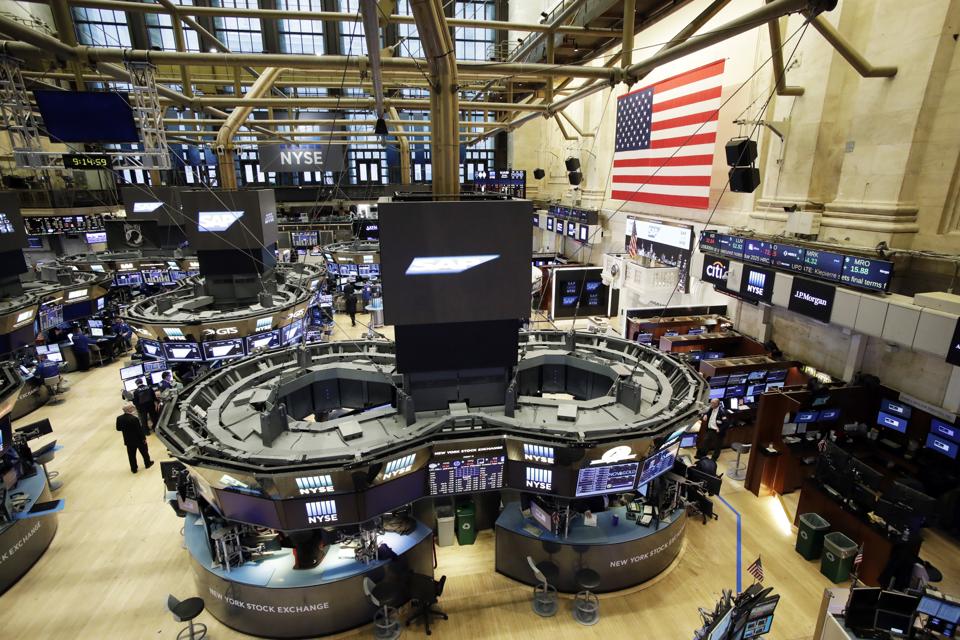 The recent softening of the economic data out of the Eurozone has made the US equity markets even more of a favorite among investors. Earlier this year in Barron’s Big Money Poll, 46% thought that the emerging markets would perform best in the next twelve months, while just 24% favored the US and 17% favored Europe, and only 5% favored China.

This view may have finally changed. Since April 1, the Dollar Index futures have risen 5.7%. Of course, the prospects of higher US rates and continued evidence of a strong economy have likely helped increase the fund flows into the US markets. The weekly chart shows that it is now challenging the strong resistance in the 95.00-area that goes back to October 2017 (line a). A move above this level will make the next upside targets in the 98-100 area.

The weekly indicators are positive and do favor an upside breakout. The weekly on-balance-volume (OBV) has formed a significant bullish divergence, as when the dollar Index was forming lower lows (line b) the OBV was forming higher lows (line c).  The OBV has been acting stronger than prices since early in the year and is already close to the 2016 high.

The Herrick Payoff Index uses volume, price and open interest to measure money flow. It completed its bottom in April when it overcame the resistance (line d).  It shows a bullish zig-zag formation.  The dollar’s strength has clearly hurt ETFs, like the iShares MSCI Emerging Markets (ETF), which is down 8.3% over the past three months. There are no signs that the broadly based emerging market ETFs are close to bottoming even though the bearish sentiment is growing.

Many may remember how negative the sentiment was on crude oil last summer. Even though the nearby crude oil contract was trading near the $45-level, some were looking for it to drop below $40 per barrel.  Of course the August crude oil contract closed last week at $64, after recently moving above the $70-level.

The comparison charts of the Dollar Index and the iShares MSCI Emerging Markets ETF (EEM) show that EEM made its high in January (line 1), and the DX made its low the next month.  The dollar’s current strength is likely enough to discourage many from considering a global ETF for even a small part of their portfolio.  However, many of these global or country ETFs can have impressive performance, and there is an advantage to buying before prices have already started to accelerate upward.

From the January 2016 low to the January 2018 high, EEM gained 96%. Even as only a 5% holding in your portfolio, such a gain would have been helpful.  The long term chart shows important support in the $41-$42.50 area, which is just 5.5% below current levels. This chart, and those of some other global or country ETFs, indicate that there is likely to be a good opportunity in 2018 to diversify your portfolio overseas.

As part of my regular weekly analysis, I review the thirty-two country and global ETFs on this table.  The first step is to see which ETFs closed the week above or below their quarterly pivots (QPivots). I have written about this approach in detail a few years ago (Follow The Trends With Quarterly Pivots). Those ETFs that are highlighted in light green closed above their Qpivots on Friday.

The iShares MSCI Emerging Markets (EEM) has been below its QPivot at $48.46 since the start of the quarter, which is consistent with its negative trend. The table also provides the current 20-week EMA which, when rising, can provide a good measure of support.

The next step in my weekly analysis routine is to scan for which ETFs have positive (green) or negative (red) momentum. Last week there were two new weekly buy signals in the iShares Currency Hedged Germany (HEWG) and the iShares Currency Hedged MSCI Europe (HEZU).  Both ETFs hedge the Euro exposure for US investors. Both ETFs have been above their QPivots since the end of April. Before investing in either of these ETFs, one should carefully read their prospectus on the iShares website.

As of Friday’s close, there were four ETFs—iShares MSCI Germany ETF (EWG), iShares MSCI Hong Kong ETF (EWH), iShares MSCI Taiwan ETF (EWT), and iShares MSCI UK ETF (EWU)—that generated new weekly negative momentum or sell signals. Every month, I analyze the monthly charts, and many of these same ETFs had negative monthly momentum as of the end of May.

There are some ETFs, which are currently negative based on my weekly analysis, that are now approaching major support. These I am watching for signs of a bottom. One such ETF is the VanEck Vectors Vietnam (VNM). It has a fairly high expense ratio of 0.66%, with an average volume of 211K. This ETF has 37 holdings with over 62% in the top ten stocks which makes it a more volatile and higher-risk ETF.

The relative performance was positive from October 2017 until April 2018, when it dropped below its WMA. It then made a new high with prices. The weekly OBV formed a negative divergence at the highs (line c), before it dropped below its WMA. This is the resistance that needs to be overcome to confirm a new uptrend. The OBV has major support (line d). This is an ETF I will be watching over the next several weeks.

The data on the US economy was strong again last week, so it is no surprise that investors around the world favor the US. For example, the Retail Sales data was expected to come in at up 0.4%, but instead rose 0.8%.  The Empire State Manufacturing Survey also came in better than expected at 25, well above the consensus at 19.1.  Even the mid-month reading on Consumer Sentiment beat expectations with the highest reading in two months.

This week, we have the Housing Market Index on Monday, followed by Housing Starts on Tuesday, and Existing Home Sales on Wednesday.  Then on Thursday we have the Philadelphia Fed Business Outlook and the all-important Leading Indicators.  All of the economic indicators show strong and positive trends so if we get a number that is weaker than expected, don’t worry.

The daily S&P 500 advance/decline line made a new high on Tuesday, and is still clearly in a positive trend. The A/D line has support at both its WMA and uptrend (line c), both not far above the breakout level (line b). The weekly A/D line (not shown) made a marginal new high last week, and is also well above its rising WMA.

The PowerShares QQQ Trust (QQQ) was up 1.45% last week, closing the week strong, unlike the S&P 500. The weekly chart shows a well-defined upward sloping trading channel. The QQQ came close to the monthly pivot resistance at $178.81 last week. The upward boundary and the weekly starc+ band are now in the $183.70-area. I still think this is an potential upside target but of course there may be a pullback first.

There is initial support now in the $173-area which corresponds to the two-week low and the rising 20 -day EMA.  If this level is broken, then we could see a decline to the $170-$171 area. There is more important support at $166.88. The weekly Nasdaq 100 A/D line is rising strongly and is well above its March high (line c).

The small cap stocks continue to lead the market higher, as the daily and weekly analysis on the iShares Russell 2000 (IWM) are positive. Both the Russell 2000 and small-cap S&P 600 A/D lines continue to make new highs. The relative performance analysis also still indicates they are the market leaders.

So what to do? If we do get a sharp pullback this week in reaction to the escalating trade situation, then I would still be looking to buy the small cap ETFs. In my late May post, Which FANG Stocks Look Best For A Summer Rally?, I liked both Amazon.com (AMZN) and Alphabet (GOOGL) the best. They are up 6.5% and 6.9% respectively since then. Therefore, on a pullback, I will also be looking to the tech sector, as the First Trust Dow Jones Internet (FDN) is one of the strongest ETFs.

As I commented a few weeks ago, I also like the action in the health care sector, as it has emerged as a new market leader. However, as I noted in last week’s article, the financial sector and the big banks stocks look weak technically. They may be hit even harder on the next market correction, so I am avoiding this sector for now, with the exception of some regional banks stocks, which still look good. Now that earnings season is mostly over, there are a number of stocks that will look very attractive on a pullback to support.

In my Viper ETF Report and the Viper Hot Stocks Report, I provide market analysis twice a week with specific buy and sell advice. New subscribers receive five trading lessons for just $34.95 each per month.