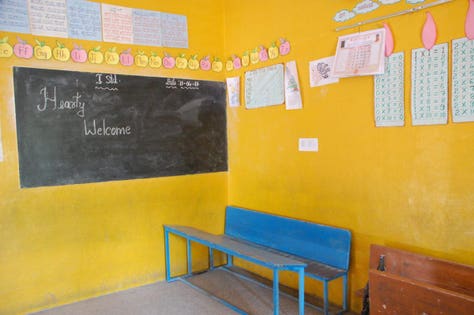 In 2013 an ambitious new company called Varthana was founded in response to one of India’s most intractable problems: education. India’s school system has the distinction of being the world’s largest and also one of the world’s worst; a 2017 article in the Economist described the quality of India’s schools as “a scandal.” At 450 million, India has the largest youth population in the world – for context, this exceeds the entire U.S. population by 125 million – and with one third that population not enrolled in any school at all, education is a massive and urgent problem.

Varthana’s solution? Provide financing to the growing number of affordable private school owners allowing them to expand their infrastructure, invest in teacher training, and introduce new learning methods into their classrooms, reaching more of India’s low-middle income student population, where there is an extraordinary need and demand for education.

There was just one problem – no bank would lend them money. Private schools for low-income families? Too risky. Too specialized. No precedent. Not a fit with existing product lines like small business or real estate lending. Too much work.

Thankfully, there is a world of finance that exists precisely to fund businesses like Varthana: impact investing. Impact investing is the way in which companies that are seeking to create financial return and sustainable social and/or environmental outcomes access capital. These companies are often challenging the status quo, disrupting systems that don’t fully or equitably serve populations or the planet, changing how critical services — like education– are provided and importantly, who they are provided to.

I’m proud to count Varthana among the many exciting partners that we invest in at Calvert Impact Capital, the non-profit investment fund I lead as President & CEO. But 12 years ago, I would have been the one rejecting them. I worked for investment banks on Wall Street and in London and if I learned anything from my time in banking, it’s that traditional markets like to finance the familiar. They are attracted to known business models, proven management teams, or leaders that are from a certain academic pedigree, socioeconomic class or gender, and they often reject models that serve a broader set of stakeholders. Outside of the box is not a territory they are comfortable with or built to explore.

After a decade in banking, and a brief stint learning yoga in Australia, I stumbled into impact investing while volunteering for the New York Public Theater. They needed a loan to support their business needs, but were unable to access funding from traditional sources and I realized that I could put my financial skills to work for deep community impact. I was hooked! And now, I’m proud to lead one of the most active players in the impact investing industry.

Today, more than ever, there is an opportunity to bring the worlds of traditional finance and impact investing closer together, as impact investing grows in size, stature and sophistication.

But how do we get more investment in the Varthanas and the New York Public Theaters of the world?

We need more investors to understand the financial supply chain and their role in it. In other words, we need investors to understand how businesses can grow in budget, revenues, and profits, and over time establish a track record of performance, repayment and returns. The once unfamiliar starts to become recognizable and investors can understand and price risk appropriately, allowing investment resources to begin to flow more efficiently.

Today Varthana works with 3,500 schools in 28 locations around India and impacting 3.5 million children and recently closed a $60mm equity investment from the largest private equity firm in India. While the solution to India’s education crisis is still a way off, their growth and track record have had another critical impact – showing traditional financiers that affordable private schools are a good credit risk and a great market opportunity.