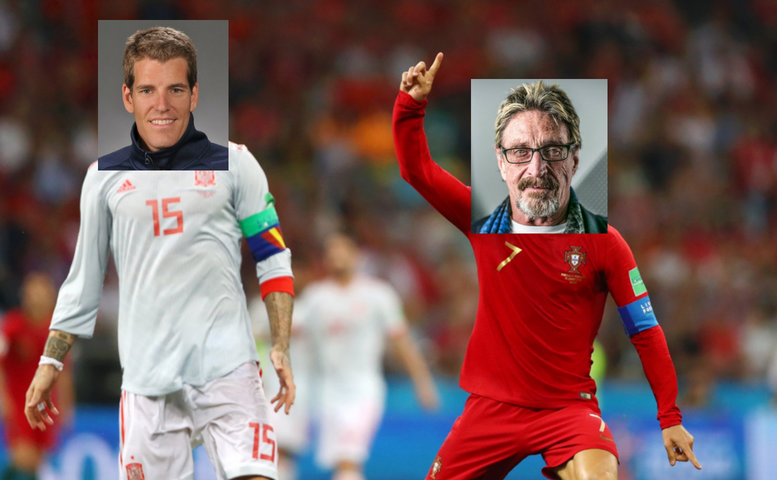 If you’ve missed it, don’t forget to meet the players for all of our upcoming matches.

Who will take home the W today? We shall soon find out!

All of the matches today during the World Cup were neck-in-neck but who prevailed victoriously?

Brand Garlinghouse came up on top in today’s first match with a score of 1-0. It was the first time Uruguay has won their opening match since 1970. Egypt is still winless at the World Cup Finals and has failed to win five matches. Jose Gimenez scored for Uruguay in the 89th minute of the match. Egypt received two yellow cards this match – sorry Eric Voorhees.

Tim Draper was victorious in Iran’s first match of the World Cup defeating Zhao Changpeng and Morocco, 1-0. Unfortunately, Morocco has never won their opening match at a World Cup tournament, ever. Iran did not attempt a single shot in the second-half of the match and won by Morocco’s Aziz Bouhaddouz making it in his own goal at 90+5′. This was the first time the two teams met at the World Cup.

Tyler Winklevoss and JohnMcAfee pulled out a draw in today’s wild match! It was a high scoring match between Spain and Portugal; ending at 3-3. Cristiano Ronaldo, Portugal’s striker, scored his 51st hat-trick (club and country) to tie the match in the 88th minute. Coincidentally it was the 51st hat-trick scored in World Cup history.

No one takes the cake this match, but Brava’ Ronaldo.