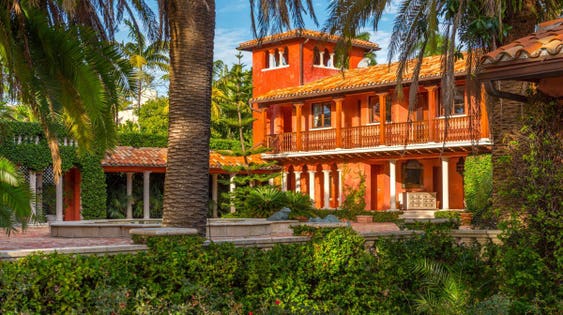 Lennar Corp. Executive Chairman Stuart Miller paid $33 million this week for the property once owned by German playboy Thomas Kramer on Star Island, the Miami Beach enclave featured as a backdrop to “Miami Vice” in the 1980s. It’s the highest price paid for a Miami Beach single-family home since 2015.

Kramer, a former Wall Street commodities trader famed for wild parties he hosted at the estate, spearheaded the development of Miami Beach’s South of Fifth neighborhood more than two decades ago. Kramer last year forfeited his property, legally known as 4 and 5 Star Island Drive, to Verena von Mitschke-Collande and Claudia Miller-Otto. The two were plaintiffs in a lawsuit against him that started in Switzerland in 1995 following the death of Siegfried Otto, who fronted much of the money Kramer used to invest in the formerly rundown area of Miami Beach that now is one of its priciest neighborhoods. Last year a Florida judge ruled Kramer’s conveyance of his Star Island property to a company registered in the Isle of Man was a fraudulent attempt to avoid paying the 2003 judgment Otto’s heirs won in a Swiss court.

Kramer and his Star Island party house were featured in recent years on “The Real Housewives of Miami” and other reality shows. Kramer had a stripper pole as a permanent fixture in his dining room and would blast fog machines in his backyard during parties to shield the antics of his guests from the view of passing boats. Kramer was known for gifting his guests with T-Shirts that read: “Good girls go to heaven. Bad girls go to 5 Star Island.”

The property listed earlier this year for $40 million with Brett Harris of Douglas Elliman, who declined to comment on the sale. It has 17,000 square feet of living space, 13 bedrooms, 12 bathrooms, a movie theater, a 10,000-bottle wine cellar, a pool, gym and guest homes. The property has a stunning view of the Port of Miami and the city skyline.

Star Island is known as the home of singer Gloria Estefan and pharmaceutical billionaire Phillip Frost. In the 1980s Don Johnson lived on the island during part of the time he played undercover detective Sonny Crockett on Miami Vice, the hit TV crime drama that epitomized all the style excesses of that big-shouldered decade.

The Real Deal first reported that Miller was the buyer of the property. Miller already owns several other homes on the island, including 6, 7, 10, 11, 12 and 22 Star Island Drive, according to The Real Deal.

Miller, who started at Lennar as a kid cutting lawns at model properties for the company his dad founded, was CEO of Lennar for 21 years before announcing in April he was stepping down to take the newly created post of executive chairman. A spokesperson for Lennar, the largest U.S. homebuilder, declined to comment on Miller’s purchase of Kramer’s former estate.